What is new in Vaadin 14

Here are the highlights of the new and improved features in Vaadin 14 long-term support (LTS).

Please see the release notes on GitHub for details.

A custom theme is the easiest way to provide a custom look and feel for your entire application. It can be packaged as a dependency for reuse in multiple applications, as described in Packaging a Theme for Reuse. The CSS in a custom theme is always applied on top of the default Lumo theme. Read the documentation

Parameters can now be placed also between view names in the URL structure.

Using LitTemplate is recommended over the deprecated PolymerTemplate for creating layouts with HTML and Java UI logic. It is recommended to use TypeScript for the template, and this has been updated to the examples in the documentation. Starting from Vaadin 18, the initial attribute values in the template are reflected to the server-side state when @Id mapping components. This applies to PolymerTemplates too.

Avatar and AvatarGroup components that are used in Collaboration Engine.

The development-mode server now runs in a separate thread. This means that server startup is no longer blocked by the frontend resources install and webpack dev-server startup. Larger, real-world projects, such as those with ORM initialization (for example Hibernate), should see a clear improvement in development-mode startup times.

Form input components now have the option to add helper text below or above the field. Helper text is useful to provide the user with context about a field’s input, for example how the input will be used.

The live-reload feature now does the automatic browser refresh also after webpack has compiled your CSS files, view templates, and other JavaScript files in the project frontend folder.

Learn how to set up Live Reload.

When using HotswapAgent, Spring Boot DevTools or JRebel, the browser is now automatically refreshed as soon as the Java changes have been compiled.

Support for right to left languages

The RTL support released in Vaadin 16 is now backported to Vaadin 14.3.

Dialogs can now be modeless, resizable and draggable.

A modeless dialog is one that opens on a parent UI, but the parent remains active and can still receive focus and other UI interactions. A modeless dialog allows simultaneous interaction with multiple other dialogs and with the UI behind it. It is useful when you need information from the main UI for whatever you're doing in the dialog. You could, for example, create a floating note pad in which you can type notes while working in the main UI.

Here is a video showing one example of what you could build with the feature.

The source code used in the example is available in GitHub.

The new DateTimePicker component is a composite of DatePicker and TimePicker, but it produces a single LocalDateTime value, which you can use in form data binding. Previously you had to have two separate fields for time and date, and if the data model used for binding had a single DateTime property (instead of a separate date and time), you also needed to split and join them manually.

The API for FlexLayout has been enhanced with more CSS properties that are accessible as methods. It is no longer necessary to use the low-level Element API. New methods include setAlignContent, setFlexBasis and setFlexDirection. FlexLayout is intended for developers who want to work with Flexbox layouting in Java. It provides a more direct API to CSS Flexbox than HorizontalLayout and VerticalLayout does.

Scroller is a new component in 14.2 that allows you to create a scrollable area. You can set the area as scrollable in a vertical and/or horizontal direction. Previously, creating the same behavior involved manually setting CSS overflow on either a separate stylesheet or through the styling Java API.

Option to use pnpm for frontend build

Starting from 14.2, the transpilation of JavaScript code to ES5 (required by IE11) is not done by default in development mode, but you can still enable it with configuration, if necessary. For production builds with the build-frontend goal, it is still done by default.

This makes a big difference for the initial webpack startup and frontend compilation time, reducing it significantly from for example 20 seconds to 5 seconds.

Starting from versions 14.2 and 16 the Node.js install (which includes npm) happens automatically. It is installed to a .vaadin folder inside the home folder, and reused from there for all Vaadin projects. Note: Node is only used to build the frontend side of things; it does not run after you deploy for production!

Build applications now support DnD operations in the same UI. The new DragSource and DropTarget interfaces allow you to turn any UI component into a draggable component or one capable of receiving dropped components.

The development-mode build time is reduced for projects that have a lot of code or big external libraries as dependencies. With 14.0, server startup and update after changes was slow with certain reload tools. With version 14.1, the application build is significantly faster, in particular for Spring Boot projects that don’t have black/white-listings for the libraries they use.

IntegerField and BigDecimalField allow you to bind field values to Integer and BigDecimal types, without the tedious value conversion from String or Double.

Users are no longer restricted to only the controversial Delta format when setting the value for the rich text editor. As an alternative, they can now set the value of the editor as HTML.

The CRUD component data editor for a selected row can now be placed below or on the side of the grid. Previously, you could only show the editor as a popup.

We've updated how Vaadin 14 loads Web Components. Previously the framework loaded components using HTML Imports. Browser vendors have been reluctant to implement HTML Imports, and Chrome has deprecated the native support for it. Since Vaadin 14 we now support using ES6 Modules for importing Web Components. At the same time, Polymer version bumps to 3. Using HTML Imports with Polymer 2 is still supported in Vaadin 14 through a compatibility mode.

Web Components for Vaadin projects were previously packaged as WebJars through Bower package manager. Using Bower for frontend dependencies is currently discouraged, and npm has become the defacto standard. In Vaadin 14 npm is used as the frontend package manager. Bower and WebJars are still fully supported in Vaadin 14.

If you want to change your existing project to use the new frontend packaging, you can do it manually or use an upgrade tool (available June 2019). You can keep using the Vaadin 10 project structure in Vaadin 14 without any changes.

Simplified styling of application and components

It's now drastically simpler to include CSS files into your project. Just put the files in your frontend folder or sub-folders and include them with @CssImport. Also, you don't need to write Polymer specific boiler-plate code anymore to inject a component theme as a dom module. CssImport is not supported in the Vaadin 13 compatibility mode.

Grid now includes a built-in drag and drop support for the rows. The feature enables adding functionality such as row reordering or moving items between grids by dragging. Both single and multi-row dragging is supported. Individual rows can be excluded from dnd operations by using drag and drop filters.

Applying the @PreserveOnRefresh annotation on your view preserves any made changes to the view if the browser is refreshed. The annotation can be placed on a @Route component, and it applies when that view is open, or it can be placed on a layout in the navigation hierarchy to apply it to all views shown inside the layout.

Starting from Vaadin 14, it is be possible to embed your Vaadin applications into any web page as a web component. Embedding allows you to build micro-frontend style applications with Vaadin. Another use case is a phased modernization of your legacy app, e.g. when you don't want to rewrite your JSF applications completely, but you want to modernize only parts of the UI.

The embedding is done by exporting any server-side Java component using the exporter class. The web component is then included to the embedding page like any web component, and the interaction between the apps is possible by using properties and events. The restriction that you have to mind is that there are no conflicting frontend resources used by embedding and the embedded apps.

The Menu Bar component displays a horizontal menu with dropdown sub-menus. Selecting the items on the menus can be configured to trigger actions, and they can be disabled/decorated with custom content. The sub-menus can also be configured to open automatically when the mouse hovers over a menu item.

Responsive side menu for App Layout

App Layout gets a new feature for creating responsive side navigation. The navigation drawer collapses on small screens and can be expanded by the user.

It's possible to read client details like time zone setting and screen dimensions on the server-side code.

Sometimes you need to access some critical information from the browser on the server-side Java code. Now that information is available for you, which makes it easier to integrate web components and frontend libraries to your project.

Grid Pro now also has Java APIs for defining custom content for the cell editors. Any field that exposes a value can be used as an editor component. The cell representation, while not in the edit mode, can also be customized with a renderer.

The button for clearing the field value is now hidden by default for Combo Box, Date Picker, and Time Picker components. Showing the clear button needs to be explicitly enabled. Note that this is a change in default behavior since previous releases.

Sometimes you need to take more control over when or how often the browser sends the user’s input to the server-side. Now, this is possible with the new value change modes that apply to the text input field components:

The Select component no longer requires opening the dropdown for selecting a value. Users can change the value by typing it (or part of it) with the keyboard while the field is focused. 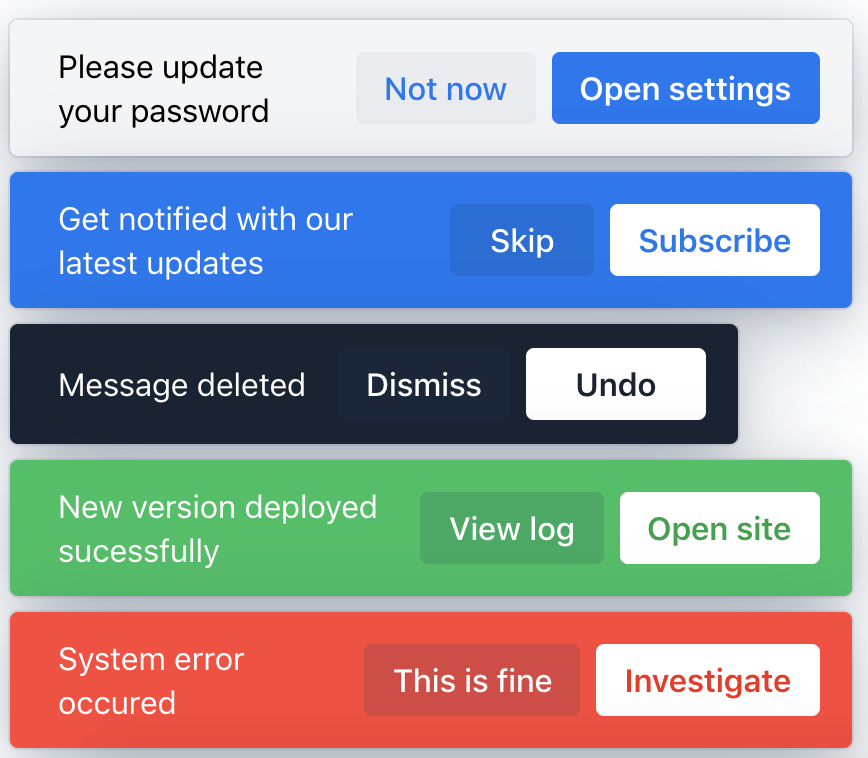 Update the version number in your pom.xml

For updating from Vaadin 10-13, follow the Vaadin 14 Migration Guide.

Incompatible changes in each version after 10.0

Safari
Vaadin 14 supports IE11, but the performance is substantially slower than in Vaadin 8 due to polyfilled web components support.

Free support until the end of June 2024

Vaadin 14 is a long-term support release (LTS). It is maintained until the end of June 2024. Maintenance guarantee starts from the general availability release (GA). Paid extended maintenance support is available.