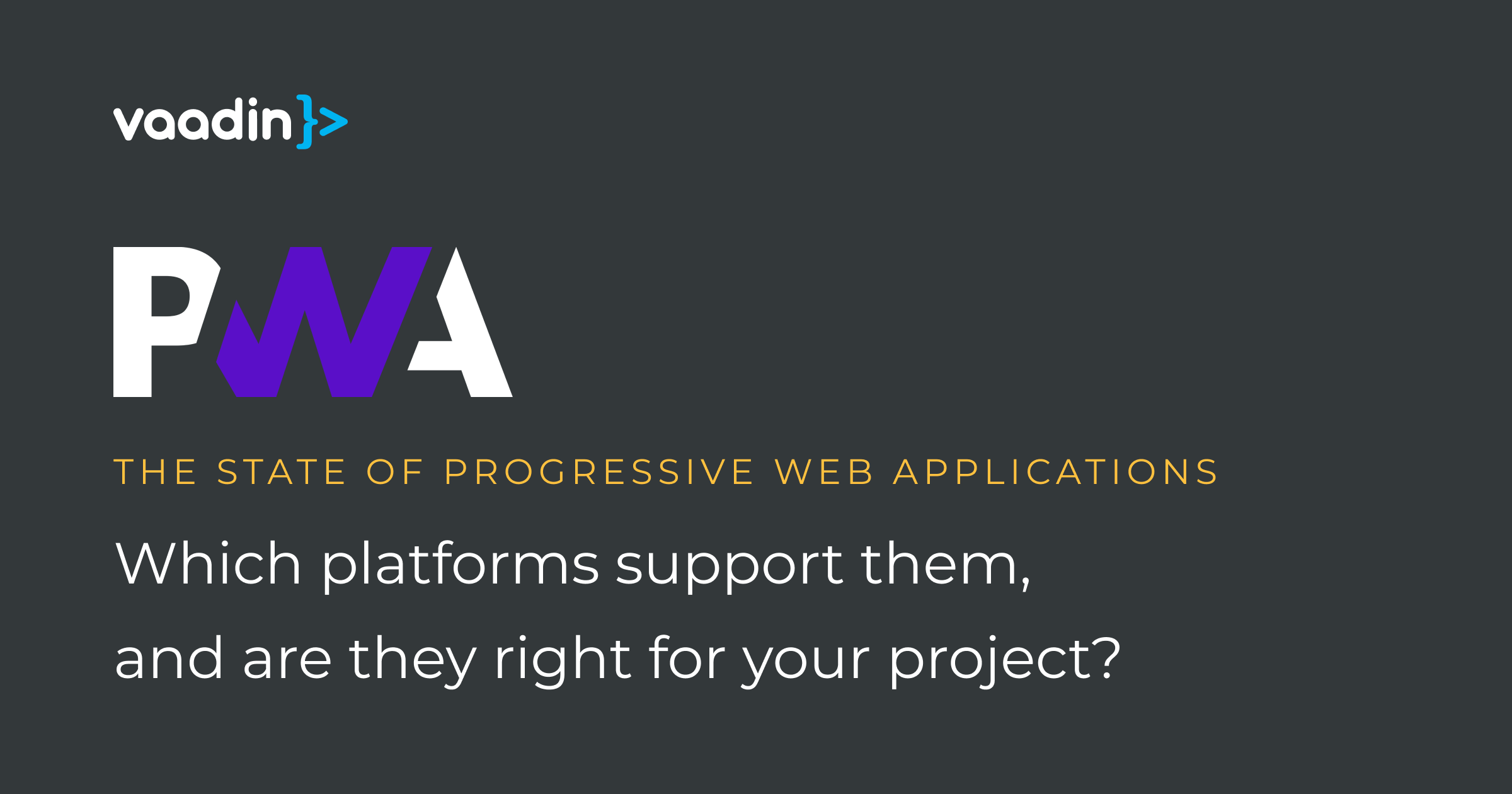 Vaadin, along with major technology firms, such as Microsoft and Google, have been championing progressive web applications for several years now.

A lot has changed in the PWA ecosystem over the last few months. For this reason, we decided to release this “state of progressive web applications” post, that will allow us to track and compile the major developments in the sphere—and help you decide whether PWAs are right for your business.

In essence, a PWA merges the simple distribution model of a web app, with the feature-set, performance and UX of a native application—allowing businesses to develop, maintain and add features to a single codebase that runs on almost any platform.

We have a lot of great material about PWAs, if you are interested in learning more:

This blog post will be periodically updated as changes are introduced into the PWA landscape.

Google and Microsoft team up to further PWAs

Two of the strongest proponents of progressive web applications have teamed up to provide developers with a new, de facto way of packaging PWAs for app stores. A core promise of PWAs is frictionless access and distribution through web browsers, however, app-store packaging does have its uses for certain types of applications, as this method of distribution provides enhanced access to the OS, and greater monetization opportunities. Both companies push for easy PWA installation and uninstallation on the Windows 10 operating system.

Microsoft’s PWAbuilder (which incidentally uses the Vaadin router for its PWA starter project) allows developers to easily package PWAs for app stores. Google’s Bubblewrap tool does the same for the Google Play Store.

PWAbuilder will now use Google Chrome Lab's Bubblewrap under the hood, according to a recent Medium post by Microsoft’s Judah Gabriel Himango. This collaboration will also result in several welcome improvements to PWAs built with PWAbuilder, including:

You can read more about PWABuilder and how it works together with Vaadin in this blog post.

The worm in the Apple

In contrast with the other tech giants, Apple has opted to limit the functionality of PWAs on their iOS and iPad OS platforms.

In this latest blow to PWAs, Apple declined to implement 16 newly introduced Web APIs in Safari, citing their potential for enabling greater advertiser fingerprinting as the reason.

This means that to successfully deploy a PWA to iOS or iPad OS requires that it be wrapped as a native application and distributed through Apple’s app store. This adds an extra step for developers. In addition, all apps submitted to the Apple App Store must adhere to specific guidelines that are generally PWA-unfriendly, including that an app must be able to function completely on a device (as opposed to having significant portions of its functionality on the web).

At this stage, the best way to convert a PWA to an iOS or iPad OS app, is to use Microsoft’s PWA builder, which generates a complete XCode package for your PWA (provided you have a Mac on which to run XCode).

This is still more advantageous than building a purely native application, as much of the app’s codebase can be shared between the pure PWAs distributed to other platforms and the wrapped version.

While it is also unlikely that the Mac App Store will see PWAs in the near future either, it is still possible to easily install and use PWAs on a Mac by using Google Chrome and Microsoft Edge Chromium.

However, we are seeing some good news for the future of PWA from Apple's latest iOS 14 update that adds support for technologies like Service Worker and allows iPhone users to set a different default browser than Safari.

Firefox turns its back on the open web

In an odd turn of events, Mozilla Firefox, usually an advocate for the open web, decided not to pursue support for installable web applications on their desktop browser. The Android version of the browser continues to support this technology.

PWAs are arguably the best alternative for app store-bound applications, so the recent announcement from Mozilla has caused a stir in the open web community.

Mozilla stated that their approach is simply a matter of prioritization. They said they’ll focus their efforts on other features with no plans for enabling installable web apps for their desktop browser. This change puts Mozilla behind the browsers of PWA advocates, Microsoft and of course, Google.

This could prove harmful for the reach of web apps on their platform, as for example The Weather Channel reported a 60% increase in activity when migrating from a traditional web app to a PWA.

Apple’s Safari browser, included with the iOS mobile operating system, and the Mozilla Firefox browser seem to have opted out of PWA capabilities in favor of security. More details of this deviation are sure to emerge soon. However, popularity is on the side of PWAs, as Google Chrome and Windows 10’s standard browser, Edge, have the major market share.

Distribution and support for PWAs by platform

So, this begs the question: Is it worthwhile for my business to build a PWA in today’s climate? The answer, overwhelmingly, is yes… for most situations.

To help you get a better idea whether a PWA is well suited for your project, we have compiled a list of up-to-date information about support for PWAs by various widely-used platforms.

Android is by far the best platform for PWAs. At present, PWAs can be installed on Android in a variety of ways:

Browser-based installation of PWAs on Android

Enterprise distribution of PWAs on Android

PWAs on the rise for gamers

Amazon announced its new cloud gaming service, Luna, that will expand its Prime Video subscription model. Users can request early access to use the service and the new low-latency gamepad on the Fire TV, PC, Mac and iOS platforms. Android support is in development and should be available soon. Of more interest is the fact that the service runs as a PWA, bypassing Apple’s App Store and its 30% microtransaction commission for installation.

Epic Games take a bite of the Apple

Amazon is not the only gaming platform protesting the App Store however. Gaming giant, Epic Games, that develops games like Fortnite and the Unreal Engine used for a plethora of games, has filed a civil lawsuit against Apple regarding exclusive Apple payments on iOS devices.

Users have been playing browser-based games on Facebook for years. With the aim of becoming the first ad-based cloud-gaming network, Facebook recently announced that several free-to-play mobile games will become available on their upcoming platform. According to game design veteran Jason Rubin, offering the games as PWAs is a possible solution to achieve this. Like Epic Games, they’re pressurizing Apple to comply, instead of adapting to the limitations of PWAs for gaming.

Google’s cloud-gaming console, Stadia, has slowly but surely made inroads into the console gaming market for Google. The Stadia platform can be installed as a PWA on Chrome, turning their Chromebooks into effective gaming machines. Google has reported that the introduction of Stadia titles has tripled the number of installed games on Chromebooks over the last few months.

Turning web applications built with Vaadin 14+ to PWAs is easy, and only requires adding the @PWA annotation in the root layout of your application. The server then automatically serves the resources required for a PWA. Apps built with the Java component API default to a customizable “offline screen” in the absence of an internet connection.

Our latest feature release, Vaadin 19, brings offline functionality for your TypeScript-based Vaadin application. It works by saving data locally and then syncing up with the server once you re-establish connection. Learn how in this video by Marcus Hellberg or learn Fusion in action with our new in-depth tutorial.

Unsure of which Vaadin version is best for you? Read our introduction to Vaadin Flow and Fusion to find out!

We also offer tutorials for every step of the PWA development process: Our comprehensive Modern web apps with Spring Boot and Vaadin ebook explains how to build a fully-functional PWA from scratch to finish.

In addition, we have a wealth of content to help you deploy your PWA to all major cloud-hosting providers and app stores.