When we ran the Future of GWT survey for the first time in 2012, the number of responses overwhelmed us. We titled the report "The Future of GWT" because we wanted to know if there was any truth in the rumors that GWT was slowing down. With over 1300 responses, it showed us and the world that GWT is very much alive and kicking. There were huge applications being built with GWT in very large corporations, and investments in GWT were growing. 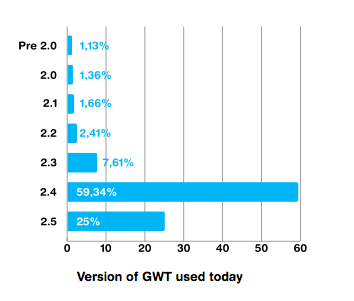 With the Future of GWT 2013, however, we wanted to know more about how GWT should be developed in the future and what Java and GWT versions GWT teams are using, to have a basis for the development teams and the steering committee to make decisions upon. We also wanted to understand the GWT community better, know about the extensions you need to support and how your teams are composed.

With this information, gathered in this survey from over 1400 respondents, we feel that this is the most comprehensive study conducted on GWT thus far and on behalf of the Steering Committee we’d like to humbly thank all of you.

Now, go ahead, download the report, see comments from central people in the GWT community and draw your own conclusions.