If I had to guess, I would say that most Vaadin applications are self-contained, with the UI and the business logic packaged inside the same application archive and running inside the same Java virtual machine (VM). However, there are cases where it makes more sense to separate the UI and the backend into two separate Java applications. The applications will obviously need some way of communicating with each other and in this article, I am going to share some thoughts about doing this with REST.

In my opinion, the greatest strength but also the greatest weakness of REST is that it is essentially just HTTP. You get to decide what the messages look like, how the URLs are structured, how parameters are passed, how errors are handled, etc. On the one hand, you can build a protocol that is optimized for your particular application. On the other hand, you have to be really disciplined to keep your protocol consistent and not turn it into an incoherent mess. This is especially important if there are more than one developer working on the REST API.

Setting up the project

When setting up a project for a two-tiered application with a separate backend and frontend, the first setup that comes to mind could look something like this:

The backend and frontend have their own modules, but there is a shared module that contains the data transfer objects (DTO) that are used to transfer information over REST. I have used this model myself in several projects and have now started to think that this is actually not a good solution, especially if the DTOs are serialized to XML or JSON.

Because of this, it is now my belief that if a platform agnostic remoting protocol such as REST is to be used, it is better to do a little bit of copying and keeping the backend and the frontend modules completely separate, than to have a shared library:

REST does not require you to use a particular message format. You can even use Java serialization or some other binary protocol if you want to. However, the most common alternatives are JSON and XML. Both have their pros and cons.

The advantage with using XML is that you can define all your DTOs in an XML Schema. This schema can then be used to generate Java classes wherever they are needed (both on the backend and the frontend). You also get the message format documentation “for free” and you do not need to rely on any third-party libraries or tools since Java has good built-in support for XML.

There are a few drawbacks as well. Maintaining the schema requires some work and the generated classes are the same on both the frontend and the backend. If you care about the size of the messages, JSON is more compact than XML since it does not require ending tags.

If you are designing a REST API for a frontend that is implemented in JavaScript (e.g. Polymer and Vaadin Elements), then JSON is your number one choice. This is also the alternative I would recommend if you want to code your DTOs yourself as opposed to auto-generating them. There are different libraries available for doing the actual conversion to and from JSON (personally, I prefer Jackson).

The drawback with using JSON is that you have to maintain the message format documentation and the code separately. There is a JSON Schema standard coming, but it is still a draft.

Picking the correct HTTP methods to use for simple CRUD operations is easy:

However, in most non-trivial applications, you want to be able to do more than just CRUD, otherwise you are moving the business logic to the frontend or even into the heads of the users (which does not always need to be a bad thing, as long as it is intentional).

There are tens of different HTTP methods in addition to the four well-known methods mentioned before. Unfortunately, very few of them are easily usable in modern Java REST frameworks, such as JAX-RS and Spring. Therefore we are going to need to do some compromises and misuse some of the existing methods.

All HTTP methods can be classified according to two properties: safe and unsafe methods, and  idempotent and non-idempotent methods.

An idempotent method is guaranteed to have the same end result regardless of how many times you call it with the same parameters (provided that nobody else has altered the state of the system between calls). GET, PUT and DELETE are idempotent methods whereas POST is not.

So what rules can we break when we need to pick a method for invoking business operations that do not fall into the CRUD category? Making a safe operation unsafe is not acceptable but vice versa is OK. This also applies to idempotency. This leads to the following rules-of-thumb:

Designing the structure of your REST resources

Getting your resource structure right and using it consistently is very important in order to keep your REST API extendable and understandable. In one end of the spectrum, you may have a message bus inspired approach where all messages are POSTed to a single resource. The message contents dictate what to do with them. 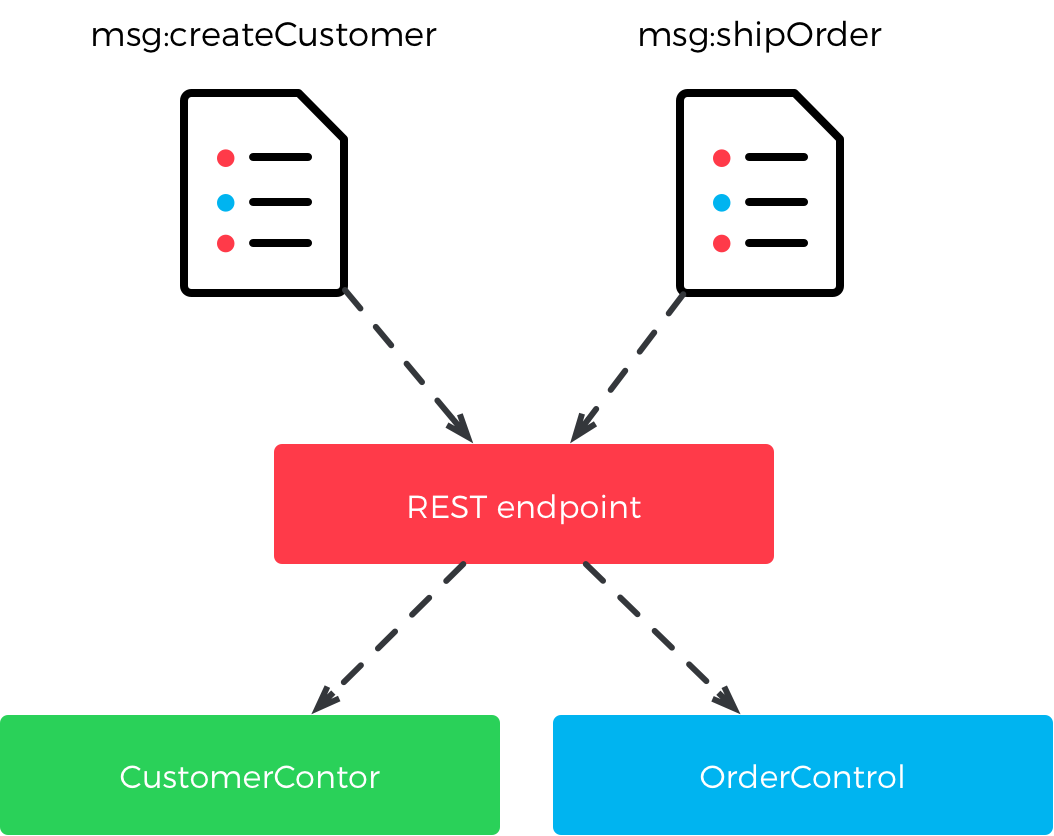 In the other end of the spectrum, your entire data model is available as a resource tree where even individual entity properties can be addressed. 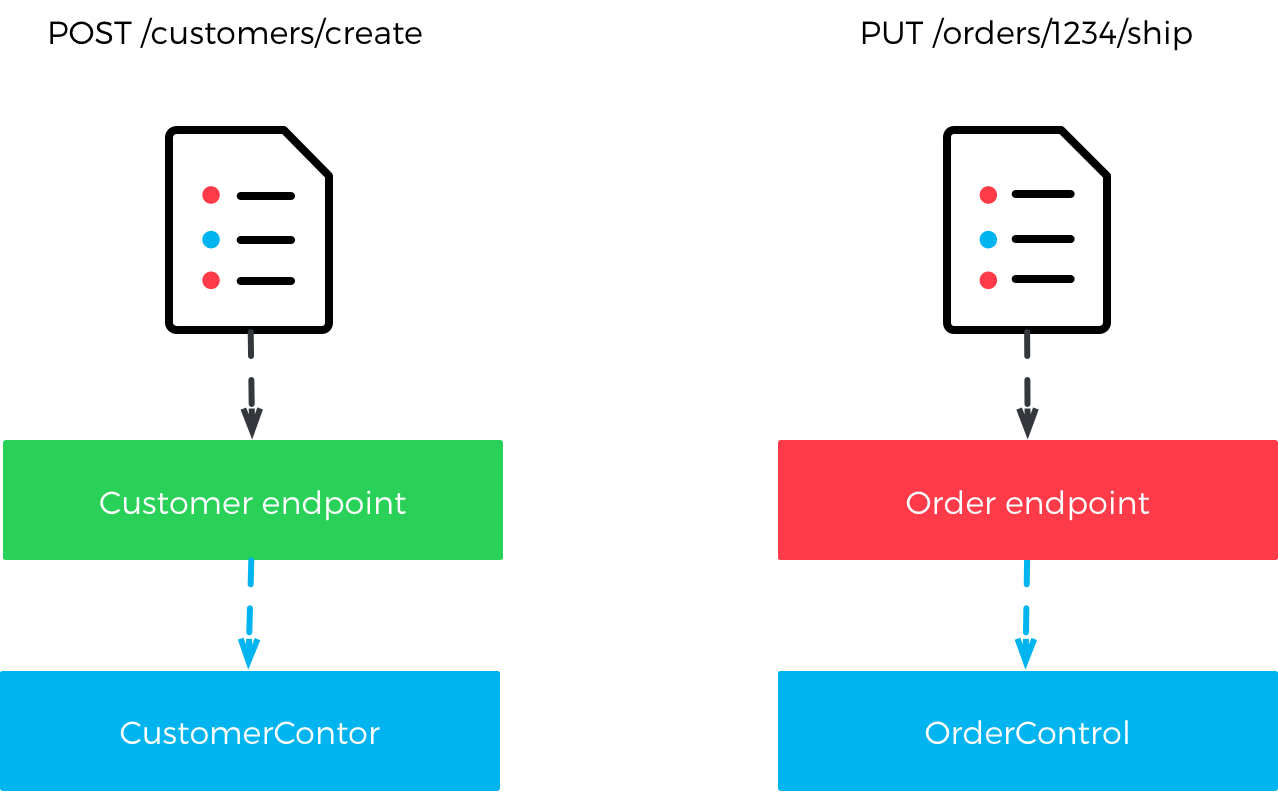 Most applications probably fall somewhere in the middle.

Versioning your API is a good idea from day one since you may end up supporting multiple versions of your REST API at the same time in the future. Instead of having the version information embedded into the HTTP request itself (for example as a header or even inside the message body), it is easier to just have it in the URL (for example /api/1.0/customers and /api/2.0/customers).

Since REST is a stateless protocol, I like to keep as much contextual information as possible in the URL path itself. Let us take an example to illustrate. In a multi-tenant system, you want to access a specific customer record (#1234) for a specific tenant (#5678). You have two approaches:

I prefer the second approach since it makes the addressing absolute and the system more predictable. It also has the side effect of making it easier to support data sharing between tenants or making it possible for the same user account to access the data of multiple tenants. Obviously, you need some kind of protection mechanism that denies access to tenants that the user is not allowed to access.

However, there are also use cases where it makes more sense to infer contextual information from the current user. Take these resources for example:

Exposing single entities and operations on them is pretty straight forward. The approach I like to use is best explained by some examples:

In some cases, this is not enough. For complex views, you may want to have a specialized REST API that returns aggregated DTOs in a single call. In this case, you should start by looking over your message formats. Can you compose your aggregates out of existing DTOs or do you need to define completely new structures? In this case it is helpful to have separate DTO classes in the frontend and in the backend because you can combine them in the way that makes the most sense. An aggregate that in the backend is constructed by combining many smaller DTOs could be deserialized into one single big DTO in the frontend.

Regardless of how you choose to structure your aggregates, you need a consistent way of naming and addressing your custom endpoints. You do not want to end up in a situation where one complex view uses one type of REST API and another view uses a completely different view. Here are a few examples:

Things do not always go according to plan. Errors - both caused by users and by the system itself - are inevitable and the REST API must be able to deal with them accordingly. There are two ways you can report that an error occurred:

There are a lot of HTTP status codes and you only need to know a handful of them. The error code is enough for the client to know that something went wrong. For an improved user experience, you may want to include additional information in the body of the response that the client can parse and show to the user or store in a log.

Finally, we are going to look at how to authenticate users. This very much depends on how you are going to implement the frontend. If your frontend includes native mobile applications or JavaScript applications that interact directly with your REST API, you need a way of authenticating the actual users of the system. In this case, my recommendation is to start by using existing authentication methods. Basic authentication or Digest authentication together with SSL/TLS are perfectly fine for this.

If your frontend also includes another system, such as a Vaadin server side application, you will need to support an authentication mechanism where the other system can perform operations on behalf of the actual users of the system. How you do this very much depends on your environment:

A word on service consumption

So far we have only discussed REST design and the server side of the backend. However, there are a few things worth mentioning regarding consuming REST services from a Vaadin frontend application.

The rule of thumb is quite simple: whenever you leave your Java VM to perform an operation, expect the operation to fail. Once the operation fails, you should not let it bring down the rest of your system.

The freedom of protocol design that REST allows is a double-edged sword. On the one hand, it makes it possible to create an API that is optimized for your specific application. On the other hand, it is very easy to turn the API into an inconsistent mess.

When you start to design your API, you need to consider the following things:

Once you know all this, you can get to work on the API. It should be possible to implement 90% of your API like this. For the remaining 10% it is OK to break your own rules, but in that case you have to keep the anomalies isolated so that they do not become your new standard.

Designing a REST API is an iterative process where you may need to go back and revisit some parts as you gain more knowledge of the system you are building. However, once a REST API goes live, you have limited possibilities to change it without releasing a new version of the API.

vaadin architecture rest
Petter Holmström
Petter (with two T:s) works as a software architect at Vaadin, mostly in customer projects. He is constantly on the lookout for new and better ways of writing software and he likes to try out new things. On his spare time, he likes to put out fires.
Other posts by Petter Holmström