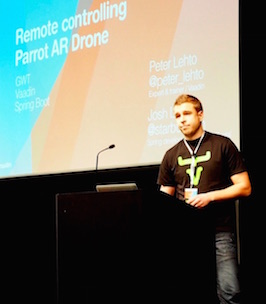 We sat down with one of our Vaadin guys here at the office to learn more about his daily work and enterprise app development. Peter Lehto is, among others, famous for his contributions to Java EE and Spring from Webinars, conference speeches and contributions.

Peter, thanks for sitting down with us. How did you end up at Vaadin in the first place?

I ended up at Vaadin because of all the interesting possibilities it had to offer back in the year 2009. I'm lucky to have been able to do so many things here as a Vaadin Expert, project manager, trainer, consultant and now also as a team leader.

To somebody new to Java EE and Spring, what is the main idea behind them?

Both are well known technology stacks for writing enterprise applications. Java EE is a collection of specifications implemented by different application servers whereas Spring is more framework like approach. Both approaches are shipped with a wide variety of features ranging from persistency solutions to remote service invocations and dependency injection. These technologies provide developers with better starting points for creating potentially very large applications with already battle tested solutions. Both stacks are also very modular allowing architects and developers to cherry pick the most useful features.

You have also been involved in the initial version of Vaadin’s Java EE support and Spring for Vaadin. What pointers could you give for starting Vaadin developers?

During the last couple of years Vaadin has taken great leaps towards seamless support for enterprise solutions while at the same time the whole enterprise stack has evolved. What used to be known as a hard to configure mess of XML has turned out to be next to trivial annotation based configuration today. It won’t take more than a couple of annotations in your UI to deploy a fully featured Vaadin UI on top of EE or Spring standards. I would say that after some initial analysis on which approach to use, pick one, and stick with it.

Although things today are in many ways much easier than what they used to be, developers writing enterprise grade applications should still follow the well known best practices and proven models of development. These are for example a well structured architecture with a clear distinction between UI and service layers as well as modular design with dependency injection. Another very popular thing nowadays is the concept of micro services where one standalone service can be developed and deployed very rapidly which can then be used by multiple different applications and projects.

Java EE 7 doesn’t have that many certified application servers, which one do you use?

I’ve been involved with a project where a modern EE7 app is deployed on the latest stable version of Wildfly.

Lately, you have been giving speeches about Spring and Flying drones. Which one do you like better yourself, Spring or Java EE? Why?

There are very strong opinions out there for both approaches. Personally I’ve been working more closely with Java EE and Vaadin-CDI support but I’m equally excited about the soon-to-be official support for Vaadin’s Spring integration. I did the drone project together with Spring’s developer advocate Josh Long who showed me some very interesting details from the Spring world. Josh has also been involved with Vaadin’s Spring support and has definitely proven that both approaches are equally important.

What makes you an EE expert?

I don’t know if it’s fair to say that you’re an expert in something on any other grounds than having used some technology a lot. I think the same applies to being able to say that I’m a Vaadin expert. There have been a lot of projects in our company involving JavaEE lately and I’m very happy for having been able to be part of them.

You have been actively travelling and speaking at conferences - where have you been / what has been the most exciting to you?

Because of my work I've also had the chance to travel a lot. I recently counted that last year I spent time in 13 different airports and flew almost 50 flights. I've been to various countries in Europe, in US and all the way to Morocco in Northern Africa. I still remember my first tech talk ever and will probably never forget about it. I think it was when I for the first time ever felt that I like to do public speaking. The best part is when the material is very well prepared, visual and contains some live demos that really attract the audience’s attention. You know that the talk was good if there are a lot of questions presented during Q&A and even afterwards personally. Next I’ll be travelling to JavaCro 15 in Rovijn, Croatia to deliver three different talks about Vaadin’s various integrations to JavaEE, Spring and GWT.

Vaadin is growing and constantly getting better known out there. It's an international open source Java house with a prominent product. If you want to do more than just the basic stuff, make your mark and go further in your career, this is the place. Please join us! :)