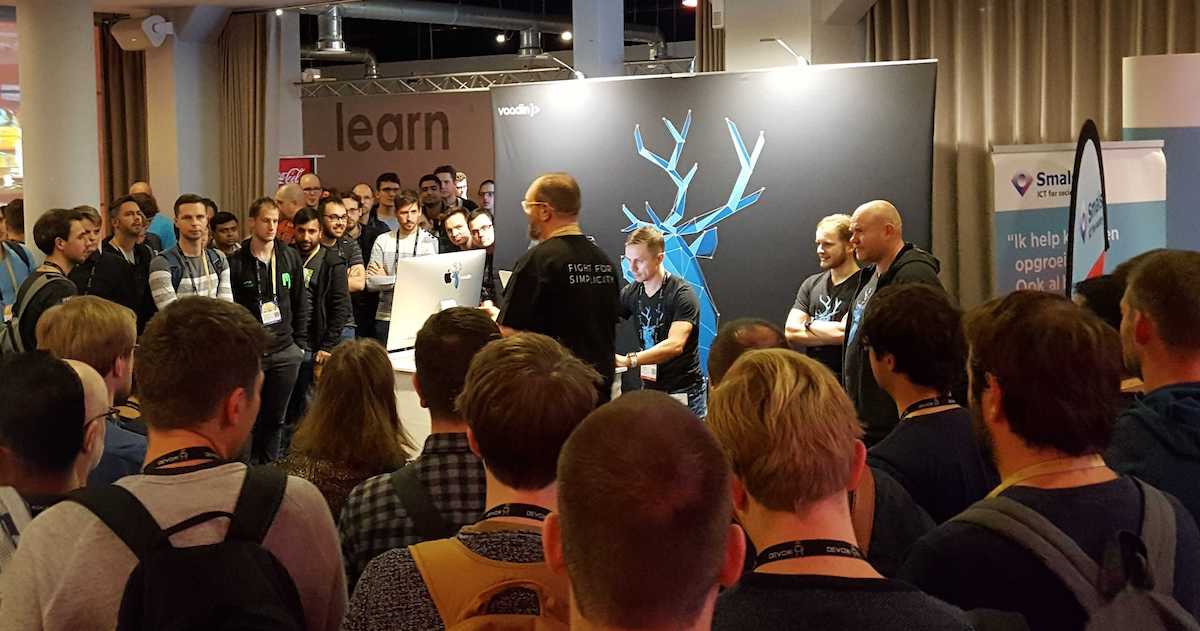 A week has passed since the final talk at Devoxx BE 2019 was delivered and the conference ended. The Vaadin team was in attendance the entire week: they met with conference attendees and expanded their knowledge by attending sessions. With so many interesting topics to choose from, picking a session certainly proved challenging!!

As a first-timer to Devoxx, I was pleasantly surprised by the venue: the Kinepolis Cineplex, with its huge movie theater rooms, was a very positive aspect for me. The audio and video quality were fantastic, both in the live sessions as well as online. The only thing missing was audience microphones for questions, as it was hard to hear members of the audience without the speaker repeated it.

I loved the opportunity to meet so many new Vaadin developers: some who already knew Vaadin and others who I  introduced to Vaadin for the first time. People are happy to learn about us: about what Vaadin is and what it can offer them. Meeting actual developers and engaging in conversations about their work is very rewarding for me as a product manager tasked with deciding what we should focus on now, next, and in the future. Thank you all for stopping by!

Java is evolving but developers are slow to adopt

For me, the most interesting topics were about Java and its future, and how Web Components had finally taken off. Java is indeed alive and well, despite what naysayers claim. Oracle, with the help of other contributors, continue to focus on keeping the language and the runtime relevant for the future, with things like the new threading model, improved language ergonomics, native memory access, native ahead-of-time compiled binaries, improved serialization, and inline types. There were several sessions about new Java language features, ranging from in-depth sessions to roadmap presentations.

One thing I found curious was when Brian Goetz’s said that people adopt new Java features quite slowly. I fully relate to this - developers are interested in new features, but adopting them still takes time. Migrating from Java 8 to Java 11 is easier than you might fear. What hurts more? Doing things you knew were dangerous all along, but doing them anyway -  like continuing to use deprecated methods, or using reflection to execute private methods you shouldn’t, or using Sun internal packages. We’ve realized that migration is quite a sensitive topic with Vaadin, as many of you are still on Vaadin 7 or even earlier versions. When you decide it’s time to move ahead, Vaadin has an array of tools and services to help you on your journey.

The architecture of the year: micro frontends

The concept of micro front-ends came up as a topic at Devoxx this year. They’re basically a set of vertically integrated full-stack micro-apps (as opposed to horizontally-layered apps). The Devoxx talk by Erik Grijzen of New Relic covered their journey to micro front-ends and we came across something similar earlier this year: a company in Amsterdam used this architecture to split their web development organization into pure feature teams that were each responsible for a feature end-to-end. In a way, micro front-ends are very similar to portlets but use the native web platform. Our very own Artur Signell recently published a Vaadin Labs experiment on micro front-ends in Java. If you are interested, check it out here.

On the ecosystem side, there is a lot of development going on that goes beyond the last decade of Java EE vs Spring: developments such as Quarkus, Micronaut, and GraalVM native images are solving problems that nobody even thought of a couple of years ago. Compared to last year, there wasn’t much focus on reactive streams this year, but I'm not sure whether the concept has fizzled out or whether it has since been adopted after the initial buzz.

As mentioned before, I’d say that Web Components are finally being embraced as what they are intended to be - a stable part of the web platform that allows you to build an even richer user experience. To learn more about this, have a look at Leif Åstrand’s talk about building the modern web with Web Components and Java!

It was also good to see continued interest in timeless non-technical topics, such as open-source governance, security in various forms, and teamwork/management. These topics don’t evolve as fast as many things on the technology side, but they are still evolving for the better and make the trade of software development better for us.

I want to thank all of you who visited us during Devoxx Belgium 2019. I also want to thank the Vaadin team who made it possible this year! See you all next time!