Micro frontends is an architectural idea where you apply ideas from micro services to the frontend or UI code. The aim is to split the application into many separate parts, which can evolve and be managed individually. The split is done based on user facing features of the site instead of the traditional way of splitting based on technical skills (frontend vs backend). Each part is as stand-alone as possible and covers the full stack from the UI in the browser to the database on the server. This makes it possible for separate teams to own separate parts without constantly stepping on each others' toes. 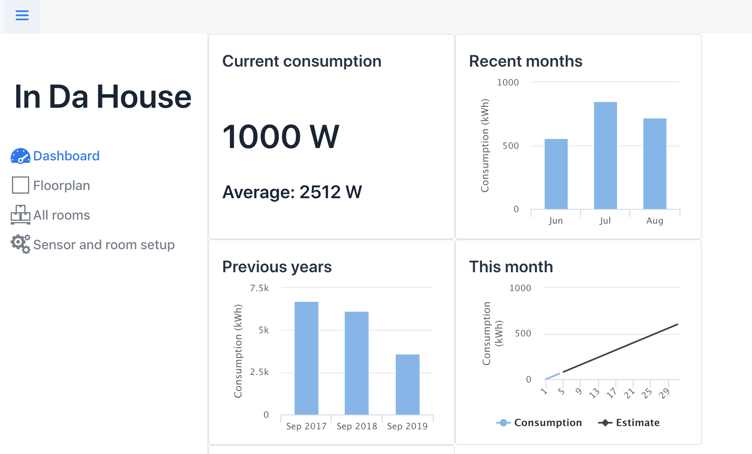 In this Vaadin Labs experiment, we have built an IoT dashboard application where you can set the heating for a flat and monitor energy usage and temperatures in different rooms. The application is a micro frontend and has been split into the following parts:

The floorplan view could be handed over to another team while the initial team maintains control over the main application, containing all other views. Should the need arise, other views could be split out the same way as floorplan.

Each part is built as a separate Vaadin project and produces an individually deployable WAR file.

These two are updated only if you introduce new components into the project.

When your application is a Java monolith, you can communicate using any of the methods available in the Java world (event bus, pubsub channels, direct method calls, dependency injection etc). In this micro frontend application we have chosen to do communication between the parts in the browser through events and element properties. This makes the WAR files for each part truly independent as there is no connection on the Java/server side. This also allows using different frontend technologies for different parts of the application although not shown in this example.

Listed among the core ideas of micro frontends on https://micro-frontends.org/ is among others to "Be Technology Agnostic" and "Isolate Team Code". In this case we have chosen the pragmatic approach and assume that all parts of the application is built with the same components. By doing this, we can use the same component bundle for all parts of the application and avoid two problems:

From a design/UX standpoint, this keeps the application consistent. You can think of the component bundle as part of your design system.

We can still add new views or components using other approaches as long as we use the same components. If you want, you could convert the Java web component (<room-info>) to a web component implemented using e.g. Lit.

The example application is deployed at https://labs.vaadin.com/iot-app/.

As a user of the application, you should not be able to tell that it is built as a micro frontend.

To better understand what micro frontends mean, have a look at the source code in GitHub: https://github.com/Artur-/iot

Are you interested in micro frontends or are you perhaps already using this architecture? Do you have multiple teams working on the same application? Share your insights below!