A bit over a year ago we released Vaadin 7 renewing the framework inside out. Then came push support with 7.1. Now what?

Let’s take a look into the future. First off, we do not see C# coming up (who is this Nutella guy anyway?). With Java 8 and lambdas already well supported, we have a solid foundation that welds Java and HTML5 platforms together in the most elegant way in the industry. So let’s start building new exciting features on that hybrid platform.

Vaadin 7 series will iteratively add features to the platform while maintaining backwards compatibility with 7.0. We guarantee to support the 7-series for the foreseeable future, but at the latest until 2018, both commercially and open source.

Next up in the pipeline will be a minor release that continues building the infrastructure. Features include:

The beta version of this 7.2 will be available later this month. The final version should follow in May 2014.

The next big feature is called Valo. It means light in Finnish. Just like light, Valo will define what you see, how it feels and tune your mood. This is the next theme for Vaadin. It will be beautiful.

How should it look like? Metro? iOS7? Adobe CS? IntelliJ? How much negative space? Which fonts? Dark or light? Rounded or sharp? Flat or shadowy? You tell us. Even better, you tell Valo.

The SASS compiler built in Vaadin 7 enabled us to make it modular. You can choose the pieces you like, vary their styles, color the overall theme as you choose, define how flat or rounded it is, etc. In short, you can parametrize Valo to look like almost anything you want. 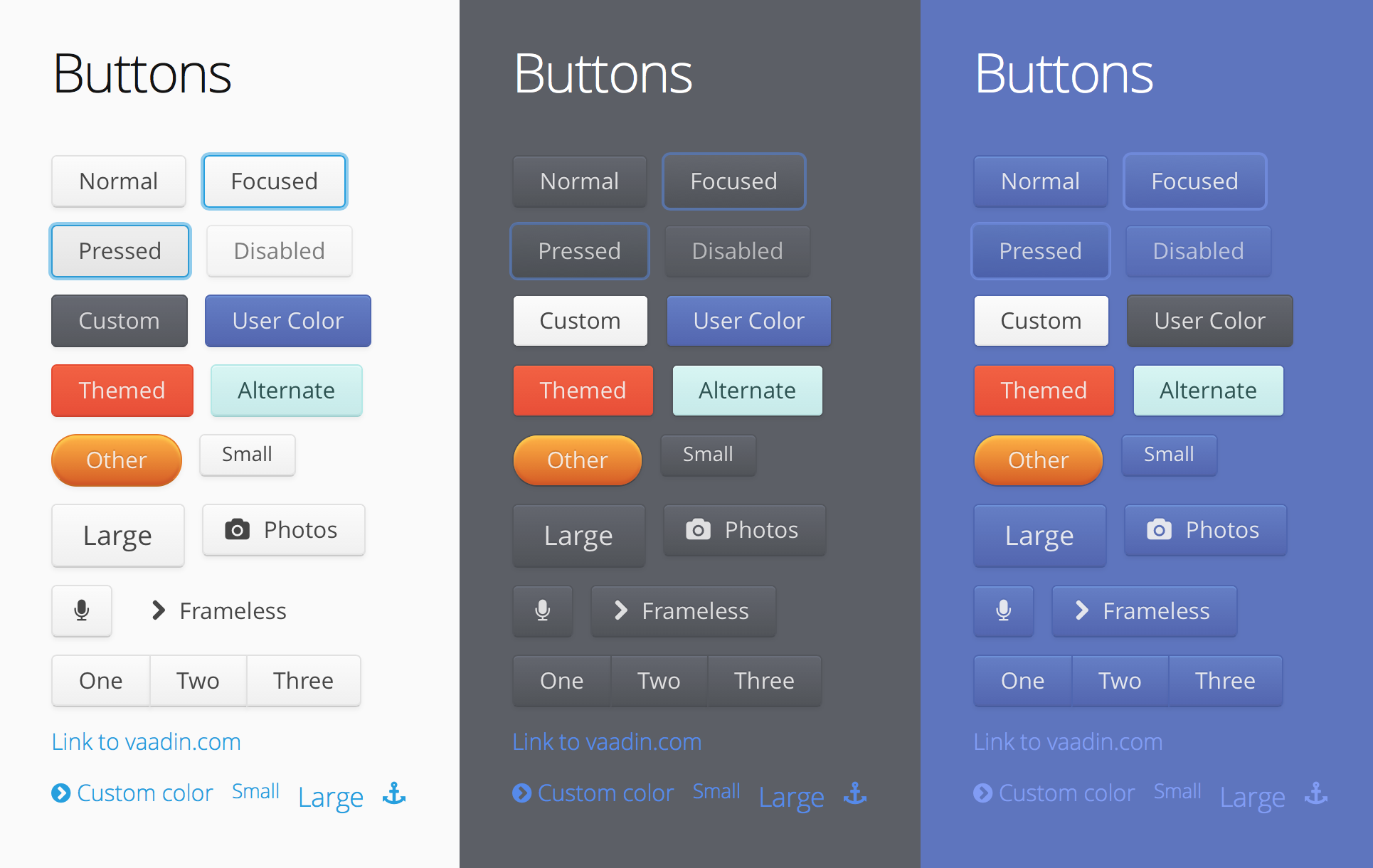 Some of the defaults for Valo

Table has been the key component in Vaadin since day 1. While it has served Vaadin extremely well, we must raise the bar. Welcome Grid.

Grid should fix everything that you feel is missing or wrong in Table. We looked at all the requests we have got during the years for what Table should do, peeked in some scary memories of how far people have stretched the component and concluded that all of this should be doable. Grid should either have the feature OR be flexible enough to allow easily to add the feature.

Simply put, we want Grid to be the best data grid for web. Par none. This sets the bar really high for performance, scalability, features and customizability. We are confident that we can make it, but it will not happen overnight.

This release will include the core of the grid. Some may call it MVP. We are looking at features like

Strictly speaking, we do not know when we are ready with this release. Sorry. First we though last Dec, then Feb, June looks like it. One thing we do know is that we'll start shipping alpha builds later this month. And after that every two weeks until we are confident enough to call it beta.

In this case the 0.1 is planned include the rest of the features we want to get in Grid. At the moment we anticipate the list to be:

Yes, there will be 7.6 and 7.7 and so on. We are just getting started with Vaadin 7. While we have tons of ideas of what we would like to be in these releases, we have to deliver the already outlined releases first before stating to pinpoint these features to certain releases.

Thus far we have been keeping our lips sealed on Vaadin 8. Saying that we will not even start thinking about it any time soon. We failed. Some thinking has been done.

With so many wonderful things like shadow DOM, custom elements, web components and the latest developments in CSS, it is hard not to be excited about the future of the web. Unfortunately the reality is that these features do not work in today’s browsers and there will be some poor fellow using yesterday’s browsers tomorrow. Especially in the enterprise world. And in the end, You, our dear friend, try to build a wonderful user experience for a customer who wants it to work in "all browsers".

Scary? What happens to those poor guys mentioned above? What about the customer who wants it all? For them, and for You, our dear friend, we have Vaadin 7 series. That will be supported and developed in parallel, until Your customer is ready to jump to Vaadin 8.

Originally we wanted to ship all of the above in just one release called 7.2. Shipping estimates started sliding faster than the Olympic Sleds when we realized the size of the effort. Finally we decided that shipping early and often is far more valuable than the blasting sound of the dropping on an anvil-sized release.

For an updated Vaadin roadmap, take a look at our public roadmap at vaadin.com/roadmap

Update: For popular demand, here are some links revealing more of Valo