Your wait is over - Vaadin Plug-in for NetBeans is here 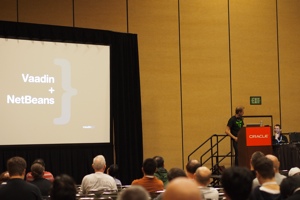 The unofficial plugin was almost an internal jest thanks to its development model. It was first loosely based on Vaadin’s own Teemu’s Community Friday work and later tweaked and fixed by Oracle’s Geertjan and Vaadin’s Sami at several conferences. The plugin slowly evolved to support more features and you could in fact almost write the roadmap for the plugin by looking at the conference calendar and checking when the Vaadin and NetBeans teams would meet next. But this wasn't exacly what our NetBeans users wished for.

Last Sunday we finally tied the knot when Sami from the Vaadin team launched the official Vaadin plugin for NetBeans at NetBeans Day 2013, held on the first day of JavaOne 2013, in San Francisco..

Check out Geertjan’s blog post about the plugin and get the latest version from the Tooling page. Leave your comments below and post your tickets to dev.vaadin.com