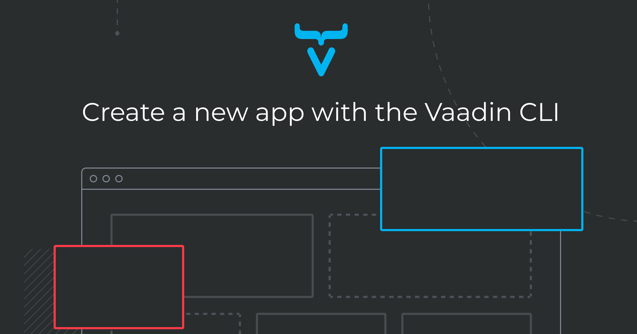 The Vaadin command line interface (CLI) is a fast way to create a new Vaadin Flow or Fusion project directly from your local terminal. Vaadin CLI is experimental and free to use.

Prerequisites: you need to have Node.js installed. Go to the Node.js download page to install it on your development machine (macOS, Windows or Linux-compatible). You can run the following command to verify if Node is already installed: node -v

The Vaadin CLI can only be used to create new projects at the moment, but we are planning to develop it further. What new features would you like to see?

You can also go to start.vaadin.com to configure and download a Vaadin project without using the Vaadin CLI.

After verifying that you have Node.js installed, open a terminal window and enter and execute the following command:

Use the Vaadin CLI

Open a new terminal window in the folder where you wish to create a new project, and run the command below. Replace my-project with the application name.

You can see the project being built in your terminal:

You can also create a Vaadin Fusion project by adding the --fusion tag.

The command creates a new subdirectory to the folder, containing the newly created Flow app. Start the project by running the following commands in the terminal window:

The app should automatically open in a new tab/window in your default browser. If not, watch the app being built and manually navigate to http://localhost:8080/ to view it.

You can use the CLI to test the latest Vaadin pre-release version by adding the --pre annotation to the command. And, as previously mentioned, replace my-project with the desired name of your app

What other presets would you like to see included?

We’d like to hear it from you. We’re planning to make the CLI more feature-rich by adding convenience functions to it, such as a Vaadin version updater, migration/conversion scripts, the ability to add views to a project (similar to start.vaadin.com), utilities for theme management, license installation for Vaadin Pro/Prime commercial features, and more.

However, we’re also asking for input from our users.

Do you use the CLI? What do you think of it? What’s missing? Let us know by commenting below or discussing it in our Discord community!