Vaadin today has an active community of over 150 000 developers, which is why it’s vital for us to know more about you so we could serve you better. In order to do this, we ran a community survey in August with over 15 questions. Over 250 of you answered so let’s have a look at what you said.

What best describes you?

This is a crucial question for understanding the priorities and challenges of our users. The majority of you are Software Developers (49%) and Architects (32%), responsible for the technology decisions and implementation of new features in your projects. The rest 19% are made up of Designers (8%) that are in charge of the look and feel of the product’s design, and Managers (6%) that are responsible for the coordination and success of the product. Overall, this spread of roles is what we would have expected, as our community is heavily made up of developers and technical people.

What best describes the company you work for?

This question has been asked in two parts: what is the industry and the size of the company that you are working for.

Let’s start with the company size. As it can be seen below, almost one in three respondents run a Startup company, taking 35% of the share. The second place was shared between Small companies (22%), Mid-size companies (23%) and Large companies (20%). It is great to see a diversity like that among Vaadin users as it proves that Vaadin fits both smaller and larger companies in different stages. 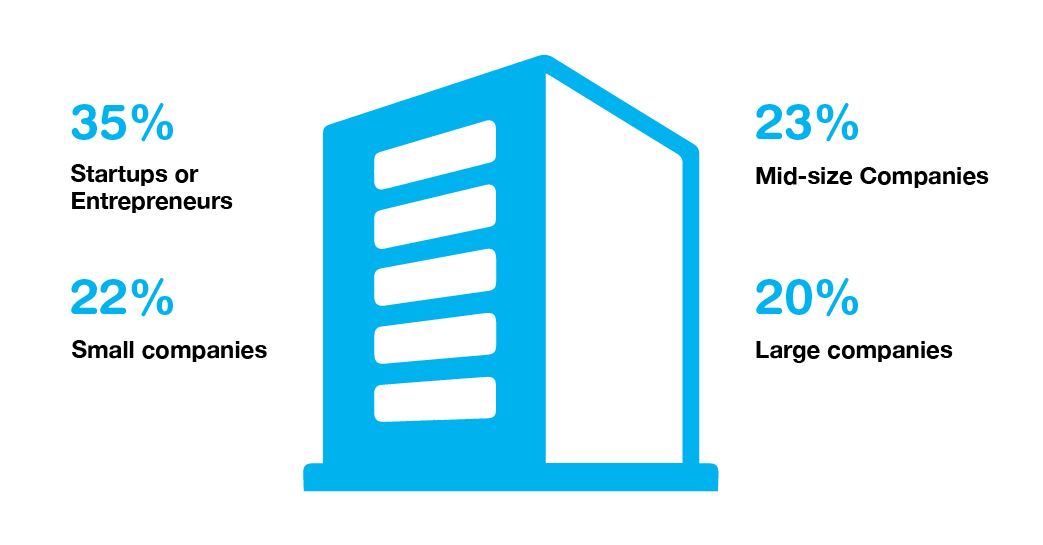 The second part of the question covers the company’s industry. It has been challenging to segment our respondents based on the industry, because nowadays many companies have two (or more) areas as their core competences, e.g. IT and Healthcare. As it can be expected, the majority (77%) of our respondents are working in Computer software industry, either making ready-made software solutions for other companies or performing consulting and building software on demand. Those companies are building software solutions for different industries, including Banking & Finance, Healthcare, Public sector, Logistics & supply chain, Retail, Telecommunications and other. It was excellent to see a confirmation that Vaadin is suitable for all companies of different sizes and industries.

With this background info about you, we wanted to know more about your technology stack as well.

Which JVM language do you use most often?

As it can be seen below, Java is leading over other JVM languages, taking up 96% of the total vote. Groovy and Scala are responsible for 2% and 1% of the votes respectively. Kotlin and many others contribute to the remaining 1%. This was somewhat a surprise to us – might it be that plain-Java users are just more eager to answer surveys? :) 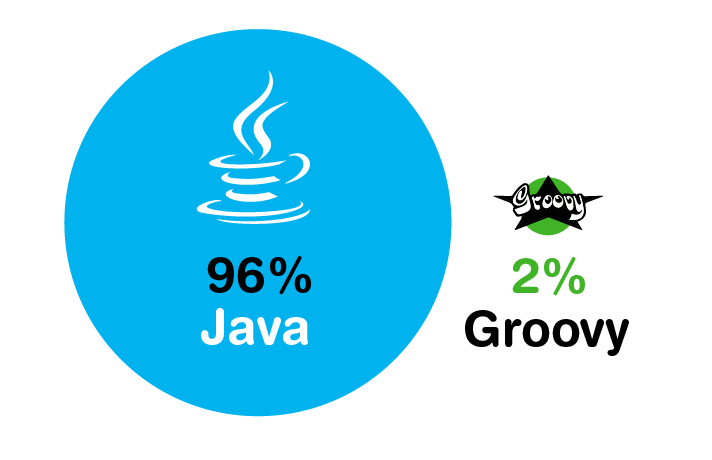 Which Java version do you use? 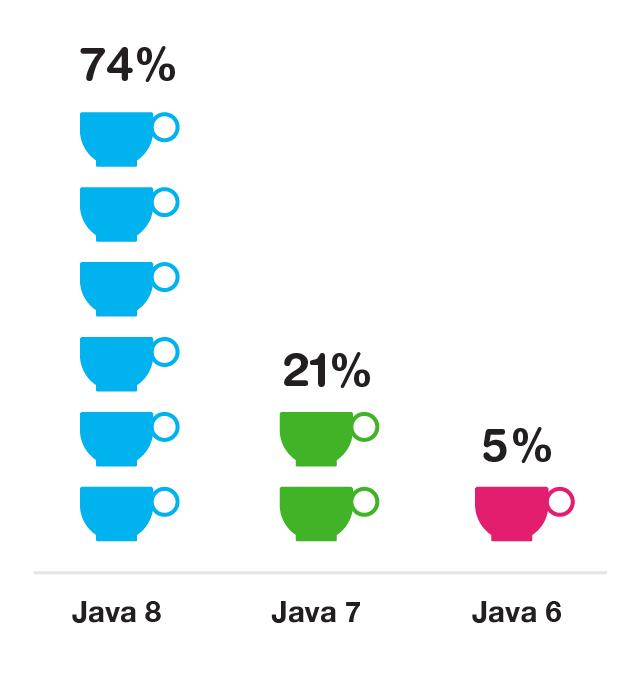 Which IDE do you use most often?

According to the survey, Eclipse is still the most popular IDE among the Vaadin respondents, taking 60% of the vote. Next in line is Intellij that is used by 29% of the users. NetBeans, as the last of the bunch, still has a solid 11% of the votes.

It’s also nice to notice that the Vaadin Plugin for Eclipse is used by 40% of Eclipse users. One of you mentioned Vaadin Designer inside the plugin as a reason to its popularity: “The plugin for Eclipse is so simple and intuitive that I was able to develop the layout of complex applications in minutes”.

These results are different from a recent JRebel survey (Java Tools and Technologies Landscape Report 2016). According to their studies, IntelliJ is the number one IDE (taking 46% of the votes) for Java developers for the first time. We suppose that it might be because Vaadin has supported the Eclipse plugin for a longer period of time.

How is your backend developed?

Front-end and back-end development work in tandem to create an application for users. That’s why it’s important for us to learn how the backend of an application is done in each case. As it can be seen below, Java EE is leading over other ways of development, taking up 41% of the total vote. Spring is used in 31% of the cases. The rest 27% includes a custom-made backend and other options. 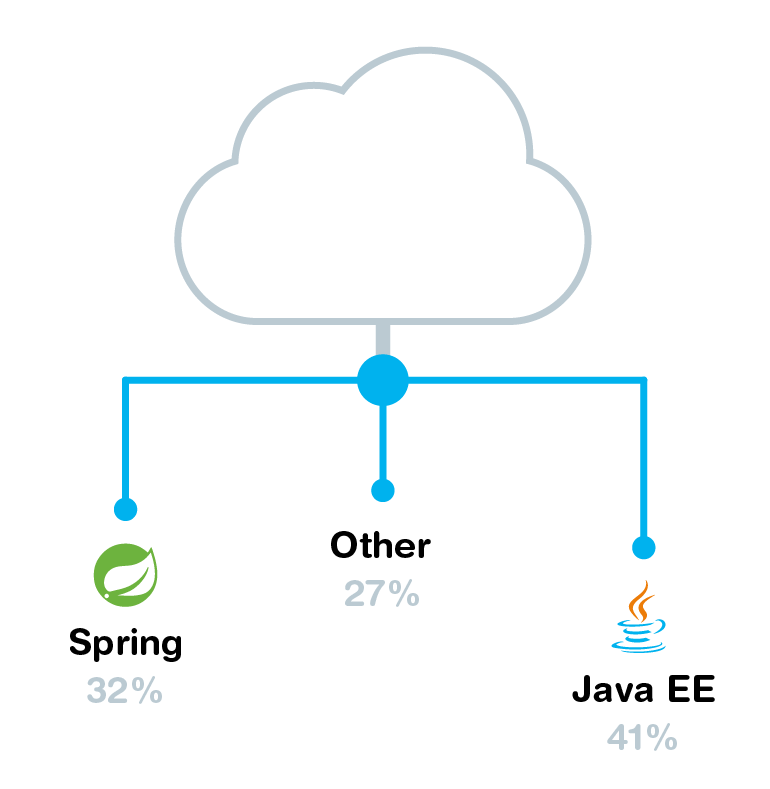 Would you recommend Vaadin to you friends or colleagues?

It is very essential for us as a company to understand how our users are perceiving Vaadin and if they would recommend it to their friends and colleagues. We asked this question using the NPS (Net Promoter Score) scale, where 1  is very unlikely and 10 is very likely. We're happy to see that as many as over 82% of you gave Vaadin Framework a 7 or higher!

Your feedback to Vaadin

It was superb to receive so many comments and suggestions in our last section - feedback to Vaadin. It was pleasing to see that many Vaadin users are positively motivated about Vaadin. Here are some quotes:  “As a Java guy I consider Vaadin to be the best Java web framework at the moment. It's pros are elegant UI design (themes) and clear and evident approaches behind everything” or as another one of you puts it “It's simple and productive… Today I start the project scribbling on paper and within minutes already have an application running in the browser. This was certainly the greatest motivation of technical leaders to adopt the framework”.

While it was great to have such a positive feedback, we also received a lot of improvement ideas and suggestions. Some users were proposing to have more “out-of-the-box” examples and tutorials. Others were recommending to have additional tutorials for different IDEs, such as IntelliJ and Netbeans. A few respondents mentioned that Vaadin’s public roadmap should be more transparent with a clear explanation of the company’ priorities and future steps.

There were many other priceless comments that will be taken into consideration. You’ll hear something about all of the mentioned things very soon!

Once again, we are extremely grateful for your contribution, your honest information, and if you still haven’t filled in the survey, please do so now at vaadin.com/survey

Anna Emelyanova
Anna Emelyanova is responsible for user experience and understanding the challenges & needs of our community members. In her free time, Anna enjoys traveling, snowboarding and spending quality time with her family.
Other posts by Anna Emelyanova