A few weeks back Vaadin attended the OpenNMS Dev Jam event that was held at the University of Minnesota in Minneapolis. OpenNMS is an open source enterprise grade network management application platform that has a highly engaged community of developers. More than 30 developers around the world attend the event. 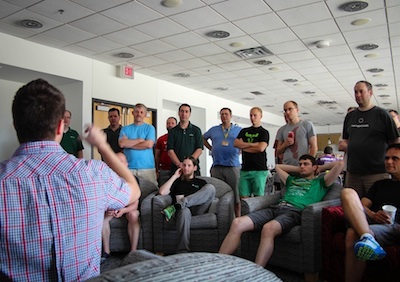 Dev Jam is a great opportunity for the developer community to meet up and work on new features together in what could almost be described with the Finnish talkoo-spirit. Groups formed organically around areas of work that the community members felt they wanted to work on. The atmosphere was very close to that of a lan party – people were working from the early morning to late at night fueled by caffeine, snacks, and interesting discussions.

Vaadin Developer Marcus Hellberg's role at the DevJam was to help migrate some Vaadin 6 based components to Vaadin 7. The OSGi based modular system presented us with some challenges when moving to Vaadin 7, but gave us a chance to learn a lot along the way. They managed to get all the components running on the recently released Vaadin 7.1.
"It was nice to see that we were able to simplify much of the UI code when moving to Vaadin 7, showing that the design changes in Vaadin 7 really do simplify real life projects. We also took a look at creating Javascript components in Vaadin 7, allowing OpenNMS to leverage the Javascript knowledge of contributors, while still being able to present all developers a single coherent Java API." Marcus says. 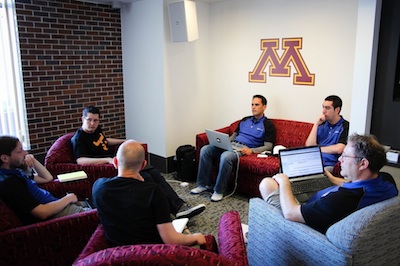 In addition to just migrating existing features to Vaadin 7, there were some interesting in-depth architectural discussions for OpenNMS 2.0.
"I don’t want to give away any spoilers, but I can tell you that there will be some very cool things in the future of OpenNMS." Marcus says.

"I enjoyed my time at Dev Jam very much – it’s incredible how much you can learn by working closely with a group of highly skilled and motivated people. Events like Dev Jam really embody what open source projects are all about – community and a passion for software development. I’m glad that Vaadin is able to be a part of that." Marcus says.

All the pictures are taken by Donald Desloge (desloge@opennms.org)