Roadmap for Vaadin Framework was published yesterday at Vaadin Meetup in San Francisco.

Vaadin 6 has been really successful in building an amazing number of features on top of the core framework without breaking backwards compatibility (too badly) with the releases. During the years we have identified several APIs where Vaadin could and should be better. In order to fix them, some changes breaking backwards compatibility are needed and thus there is a need for a new major release - Vaadin 7.

Vaadin 7 development is timeboxed. We will publish the new features and API as a series of developer preview "alpha" releases followed by (hopefully) two betas before the final release scheduled for September 2012. The features will be added in a priority order that will be decided by the end of October 2011. Current proposals are listed at dev.vaadin.com. 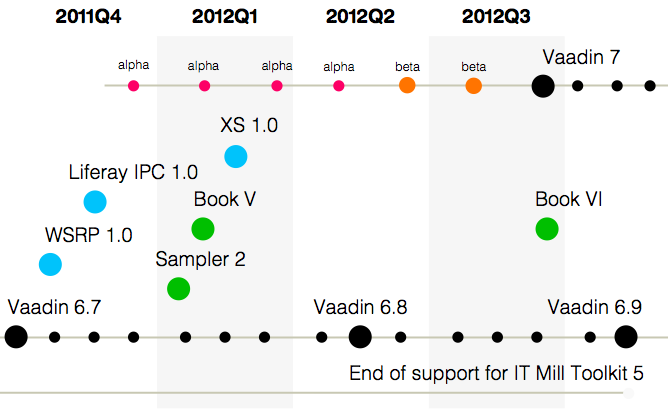 The new roadmap outlines part of the work Vaadin team will be doing for the next year or so. In addition to what is outlined now, we will be putting lots of effort in making the Vaadin Pro Add-ons collection and the Pro Account stronger. Their roadmap will be announced later.

See the up-to-date roadmap at vaadin.com/roadmap.