Once upon a time there was a Vaadin cake 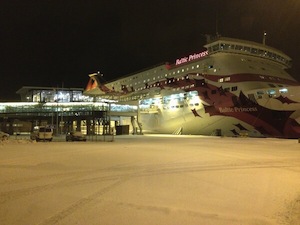 On Monday February 4th we took a giant leap forward by releasing Vaadin 7 and stepped on board of M/S Baltic Princess on a cruise to celebrate it. Many Vaadin users from Baltic countries joined us on Vaadin Developer Meetup Cruise which was an official Vaadin Release 7 Party. We wanted to offer Java professionals a chance to also network with other Java developers on their way to the Jfokus 2013 conference. We heard presentations from Stephen Chin from Oracle, Martijn Verburg, the CTO and cofounder from jClarity, Sampsa Sohlman from Liferay, Mikko Taivainen from Arcusys and also Artur Signell and Joonas Lehtinen from Vaadin. We summed up some highlights to this blog.

Stephen Chin popped into Finland on his NightHacking Nordic Tour and talked about of Integrating JavaFX and Vaadin at the cruise. In the video Stephen shows how he has managed to bundle Vaadin applications into bundled executable applications with the help of JavaFX.

After 934 closed tickets (during the last 16 months of development), over 1 000 000 lines of codes touched (FYI Vaadin 6 does not contain that many lines of code), after a lot of refactoring the Vaadin 7 is finally ready. There are some fairly fundamental things that have changed from Vaadin 6 and Artur summed up and covered shortly some main features. You can take a look on more thorough listing at what is new in Vaadin 7. Vaadin 7 gives the user more power and more possibilities, allowing you to go deeper if you want. Still Vaadin 7 can be used as before. Artur wanted to emphasize the migration guide and also the Vaadin 7 minitutorials. The presentation is available on pdf at the Vaadin Developer Meetup Cruise page.

Sampsa Sohlman works at Liferay, which is a web application platform. Liferay is an open source project that started in the year 2000 and it is Vaadin compatible platform. Vaadin has supported Liferay since Liferay version 6.0 and check out Vaadin Directory for Vaadin Control Panel for Liferay. Sampsa discussed about Portlets, especially building Liferay Portlets with Vaadin. Sampsa's presentations is soon available in pdf as well.

Mikko Taivainen from Arcusys Ltd. showcased the ePalo feedback collection and analysis system built for University of Helsinki. The system is to support students' studies and requirements for this system were quite high: it needed to be highly scalable, it should offer great user experience, integrate with all university systems, and it had to be reliable as well. Vaadin was a natural choice for the system - the team liked the programming model of Vaadin.

Martjin, besides his hilarious stand-up, wanted to bring the voice of reason by presenting the Modern Software Development Anti-Patterns. Well he didn't see to like Scrum at all. Why? See the video. 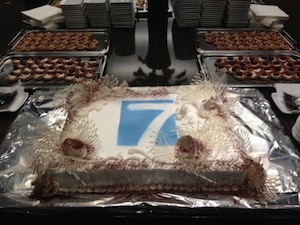 After the presentations and great speeches it was time to take a bite of Vaadin 7 cake and grab a beer - the combo is a bit unusual but the meetup folks did not seem to mind though. The cake number '7' was designed by Vaadin's Jouni and we though that it would be easier for the cake master to implement than the reindeer.

Jfokus 2013 in Stockholm and Vaadin Developer Meetup in Helsinki 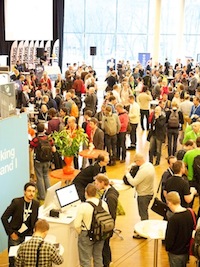