10 days have gone since the Devoxx 2012 was arranged in Antwerp, Belgium and only now have we time to stop to recap the event. Devoxx has been the clear #1 Java event in Europe for many years already, and they did not fail to exceed the very high expectations this year either.

The best thing in Devoxx has been its friendly, fun, playful atmosphere - something that captures the mindset of a developer perfectly. I guess that this is because the organizers are developers themselves. Really. Just as an example - during the conference Stephan bumped into our booth asking about i18n best practices for Vaadin. What? Turns out that he was tweaking the (Vaadin-based) registration system to offer proper localization for the upcoming Devoxx UK and Devoxx FR conferences. Just to put this into perspective - when you are running a conference with 3400 attendees, you are supposed to be quite busy...

As always, the conference was arranged at Kinepolis center, that is a large cinema center that turns into a conference venue for this geek week in November. Monday was the 1st of the two University days and it was packed with a crowd of thousands of Java-developers. With 18 talks within those two days that are longer than usual - these presentations did contain a more detailed analysis of the topics.
Exhibition Hall was opened on Tuesday and it lasted until Thursday, and it was located in the 'basement floor'. With 23 exhibitors and booths, the exhibition hall was packed between the sessions and although the days were long we got to chill out a little, when the hall quieted down. The BOFs were arranged every evening throughout the whole conference beginning 7:00 pm and lasting until 10pm. So it was quite an impressive schedule - ongoing program for more than 12 hours per day.

Once again the Vaadin's simple, white and northern layout lured in many visitors to see our desktop and iPad demos. We made many new friends and met old ones. It was once again amazing to hear about all the great applications people had been building with Vaadin. Everyone seems to be holding their breath waiting for Vaadin 7.

This time the Book of Vaadin tower was smaller and unfortunately we ran out of books on Tue already. Sorry about that. But remember - you can download a copy of the book online.

We were accompanied by ZeroTurnaround in the booth just next door and it did put a smile to our faces to hear them give demos because they used Vaadin as their demo app. I guess that this is only fair as we are always using JRebel in all of our demos. Not out of courtesy, but because it is just so good. 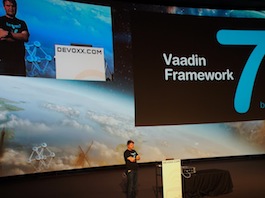 For a starter of the week our friend and Vaadin enthusiast Nicholas Frankel gave a 3,5 hour presentation and hands-on workshop on Vaadin. This talk begun with a short introduction on Vaadin's architecture and after that it was time to develop the application step-by-step, each step bringing an additional concept into play. 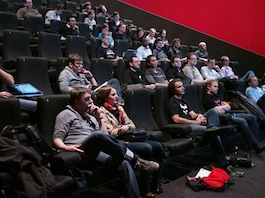 We also arranged our own Vaadin and GWT Meetup during the week on Wednesday.
Interesting talks and presentations about GWT from Daniel Kurka, Jeroen Sterken at N.V Faros and of course our own Vaadin guru's Jouni Koivuviita and Joonas Lehtinen. We had 39 attendees in the Kinepolis theater 2 and after that we gathered to Star Lounge to grab a beer and little snacks and to talk about Vaadin in a relaxed atmosphere.
Special thanks and shout-out to guys at N.V Faros for sponsoring and helping out with the meetup arrangements.

I prefer to build business app UI with...

One of the fun things in Devoxx are those whiteboards where anyone can put up their own polls. These whiteboards were situated away from the booths and exhibition hall in crowded areas where everyone walked through. One the the most interesting polls this year (for us) was asking which technologies people would like to use for building business app user interfaces. Vaadin was #2 after HTML5/JavaScript on the poll :)

It was a fun week overall. During the event Devoxx UK was announced and we are eagerly waiting for the CFP to open. The Devoxx UK version will be arranged 26th and 27th March 2013 - on the same week as Devoxx FR - and we are tempted to join the party.