One of the biggest annual Java-focused conferences, Devoxx, was held on 12th – 16th November. As earlier, we were at the huge movie theater Kinepolis in Antwerp, Belgium. We attended the conference to hear about the latest trends, as well as to share knowledge of Vaadin.

The keynote consisted of subsequent talks from Oracle and Amazon.

First, Oracle's Chief Architect Mark Reinhold came on stage and reminded us about their new release cadence for Java. Starting from Java 9, there will be a new feature release every six months. The latest version is Java 11, and Java 12 will be available March 19th 2019. Each feature release is supported for six months until the following feature release is available. They will release a Long Term Support every three years, of which Java 11 is the first one.

The release model of Java is very similar to Vaadin's release model. The key difference is that while Vaadin offers five years of long term support for free, Java LTS is only commercially available. For those who want to use Oracle's JDK builds for free, this means that you have to update Java every six months to stay on a supported version.

Oracle has also open sourced all previously commercial features in the JDK, which means that Oracle JDK and OpenJDK have the same features. Oracle expects the community to do OpenJDK releases, which means that the LTS level support would be available for free for the users if they switch to OpenJDK.

Next up James Gosling, the founder of Java, came on stage. He currently works for Amazon and announced Corretto, which is Amazon's no-cost, multiplatform, production-ready distribution of OpenJDK with Amazon's patches on top of it. Corretto 8 preview, which is based on OpenJDK 8, is available today, and the general availability release will happen in 2019 Q1. Corretto 11 will be released in 2019 H1.

With these changes to Java, I would expect there will come multiple different distributions of OpenJDK, and many Java developers will switch Oracle JDK to them.

A clear trend this year revolved around machine learning. Topics included big data, deep learning, and AI, and there was a total of 23 talks and events around the subject. As a relatively new trend, the topics were mostly introductory, including getting started with ML, doing music recommendation algorithms by analyzing songs, and teaching a computer to count the number of people based on a video feed.

The Kotlin trend has continued for a longer period with deep dives to the language and migrating from Java to Kotlin.

There was also a nice set of non-code and well-being related talks, from how to interact with remote workers to different forms of agile, improving teamwork and embracing diversity.

A herd of reindeers

The Vaadin booth was very busy throughout the week. We explained what Vaadin is, let people code with Vaadin, and handed out 600 Vaadin t-shirts. By the last day, you could see people wearing Vaadin shirts wherever you looked, which was really fun! 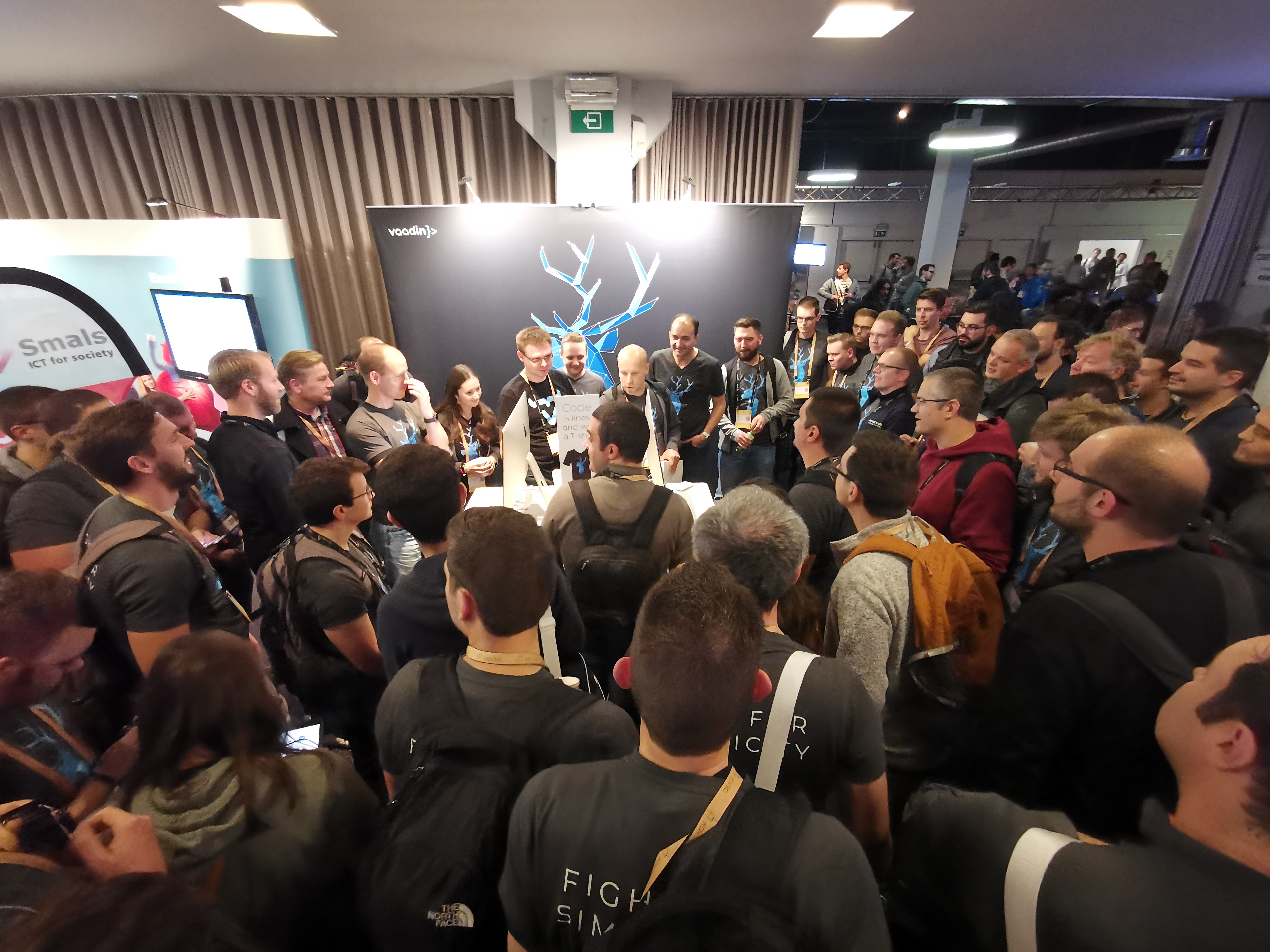 Matti and Leif also had a nice presentation on Vaadin, WebSockets and Reactor, building a chat application. 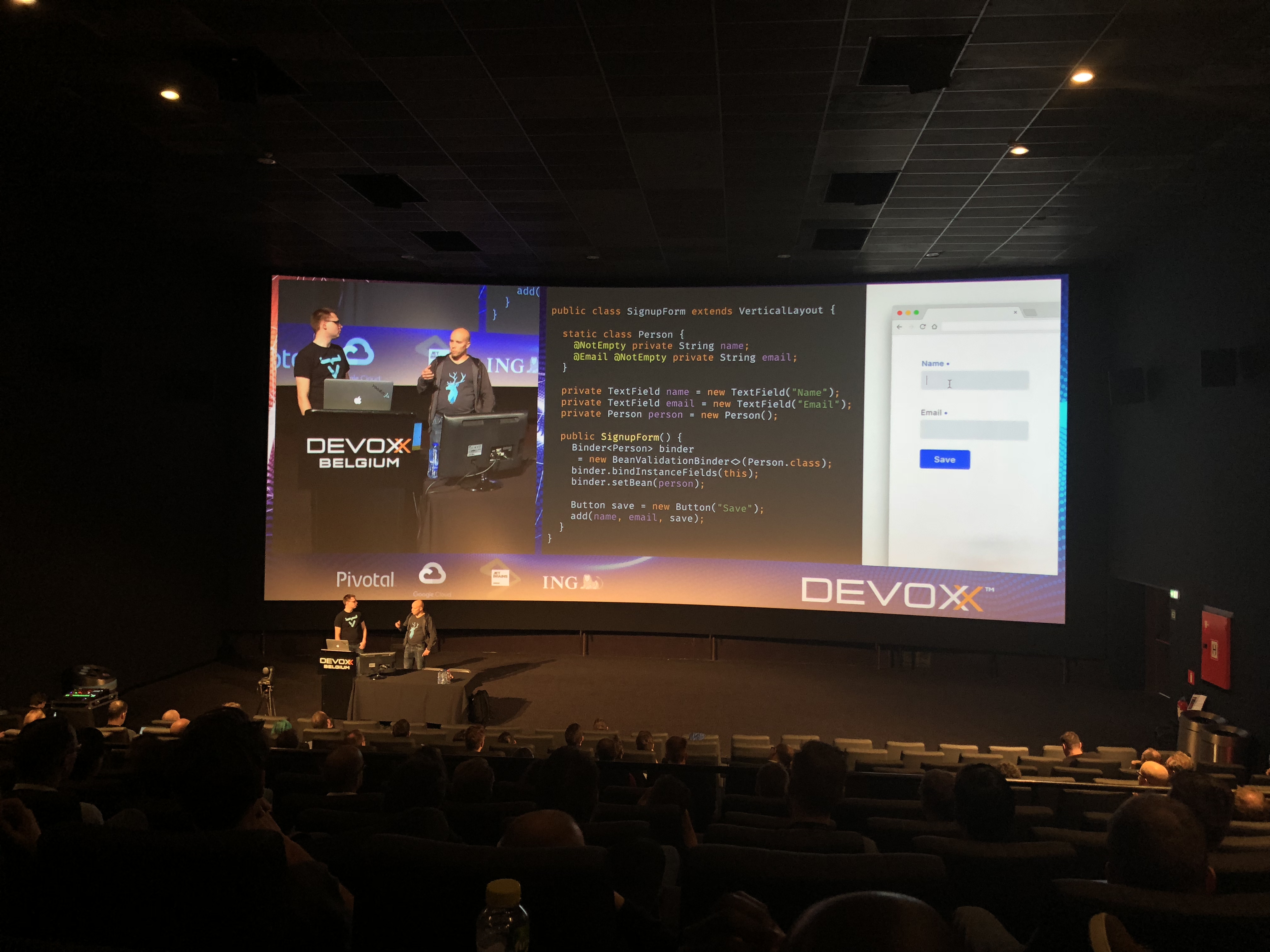