Starting Java web applications is not an instantaneous process. It is not rare to see tens of seconds for some applications to boot. Although you can get an almost instant startup time if you leave out Hibernate and run Quarkus on GraalVM, that’s not the reality we live in.

During development, tools like JRebel and Spring Boot Devtools help reduce the development cycle, but how do you tackle this issue on a live website powered by your Spring Boot application? How can you deploy great new features or critical bug fixes without causing nasty interruptions for your end users?

Traditionally, zero-downtime deployment has been achieved using clustering and high-availability setup. These are expensive to set up and maintain, especially if you haven’t yet moved over to tools like Kubernetes. For smaller-scale deployments, traditional Tomcat has provided a great Parallel deployment feature that gracefully moves your users to the new version when their sessions expire.

The project that uncovered a new approach

Over the holidays, I was working on a hobby project for my local sports club. This approach may have been just enough, but deploying old-school WAR files to Tomcat when using Spring Boot in 2022 didn’t feel quite right, especially as I have been a fan of hosting Spring Boot apps as handy Unix services for years. I also wanted to save some pennies for my sports club, so I didn’t want to go for full blown Kubernetes-based cloud deployment either. But I still wanted a decent UX for end users and the freedom to deploy updates anytime I want.

Here’s how I did it. Feel free to reach out to me on our Discord if you have any questions.

My Spring Boot application essentially provides a CMS system for our sport clubs website, as well as accommodating events and blog posts in various categories. I modernised a Perl app that was more than two decades old and used flat files for everything, into a “slightly” more modern system based on Spring Boot.

The data is now stored in an SQL database using Spring Data JPA. Dynamic website fragments are generated using traditional Spring MVC and Thymeleaf templates. And our active club members are using a Vaadin-based administration UI to edit the content, without the need for a separate webmaster. 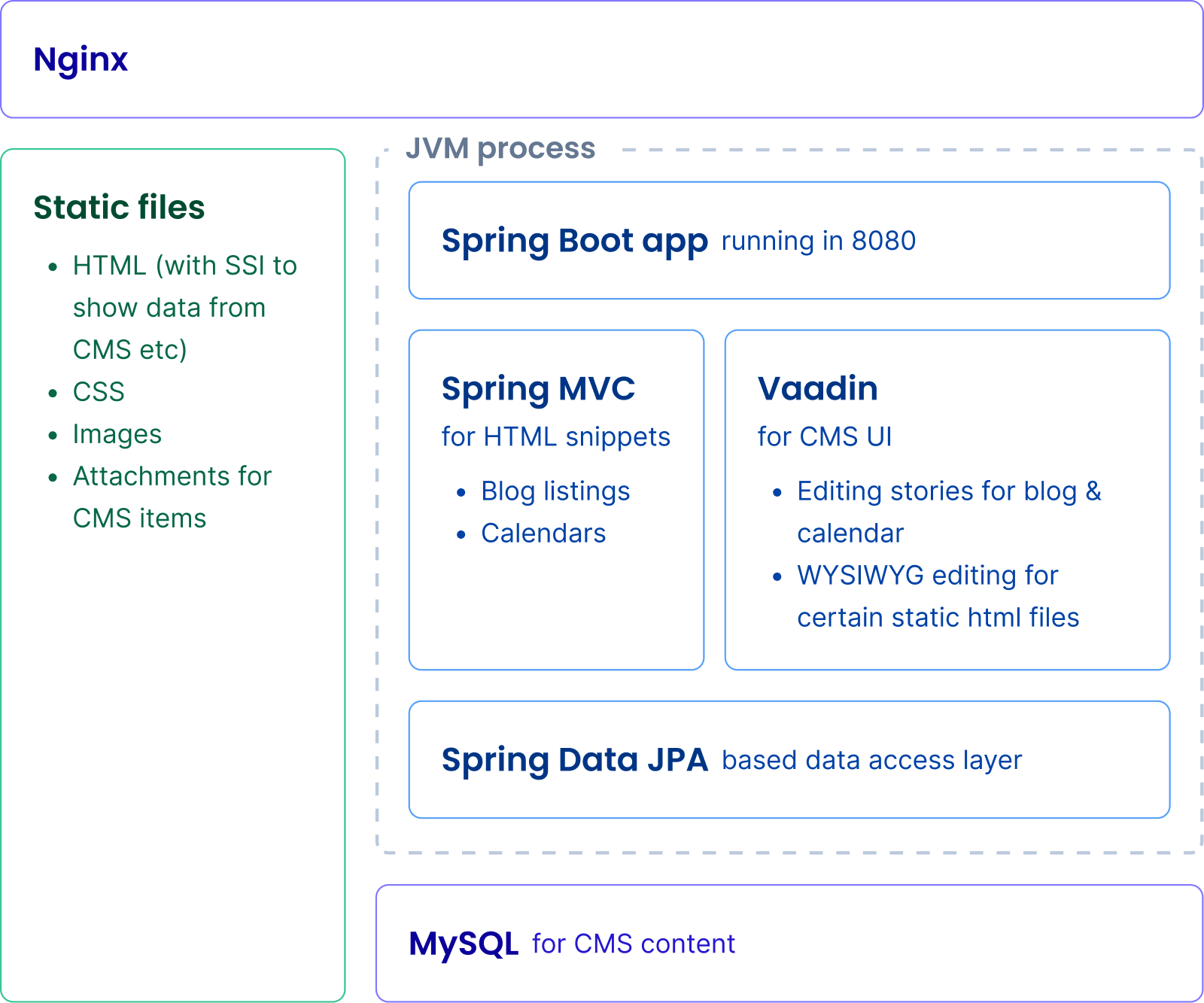 Writing the first version of the application was mostly a nice experience. I will admit I lost my nerve a couple of times while fiddling with the Thymeleaf templates. For a while, I considered also rendering those parts as Vaadin components, but this approach is a bit safer for web crawler indexing. Otherwise, I have to admit that a web developer’s life is much better today than it was in the last millennium.

Deploying the first iteration was almost trivial. I packaged the Spring Boot application as a systemd service to the existing virtual server and modified the nginx configuration to proxy the dynamic parts to it. Fully static content and some old PHP scripts work as before, and users never notice that a portion of the site is now powered by Spring Boot. The beauty of this approach is that I don’t need to change everything at once while gradually modernizing the website using Spring Boot and Vaadin.

The problems began after the initial launch. Of course, there were a bunch of bugs and missing features. Every time I deployed an update, the front page of our website showed a “503 Service Unavailable” for a while, when the Spring Boot server was restarting and Hibernate was doing its magic. In the worst-case scenario, somebody doing updates with the admin UI could lose their work while I’m fixing a bug in a Thymeleaf template.

My initial thought was to beta test our upcoming Clustering tooling. This new tooling will help Vaadin users implement professional Kubernetes-based hosting that supports zero-downtime updates and fluent session migrations for end users. But that would have required full renewal of the hosting setup, and I decided to try something more lightweight for this use case.

The recipe for trivial zero-downtime deployment

After considering a handful of possibilities, I came up with the following modified blue-green deployment setup:

This part is all done by the book. My server is running Ubuntu, so I used a systemd-style script. The only special thing is that I have two start service declarations, and the second one overrides the port to be 8081 instead of the Spring Boot default, 8080. Here is my /etc/systemd/system/pr-web-green.service file with the custom port configuration:

The other one is similar, but without the port declaration.

Make sure you also configure your Spring Boot build to generate “executable jar files”. For my Maven build, the relevant configuration is here:

This is fine for the blue service, but we need another for green. To switch between the current and the next version, I duplicated the site configuration into /etc/nginx/sites-available/paimionrasti.fi-green.conf and changed the port in the proxy_pass configuration to 8081.

Now all I need to do to switch between the deployment is to relink the active one from the sites-available directory to sites-enabled and tell nginx to reload the configuration.

As I’m using Vaadin for the admin part, doing a notification system for active users is pretty much as simple as it can get. As with all my Vaadin apps, I use a WebSocket-based communication channel, which enables me to push UI changes for all users in real time. To enable that, add an @Push annotation to your AppShellConfigurator class, typically Application in Spring Boot apps.

Next we need to collect the active UIs. I’m doing that directly in my UserService class by making it implement UIInitListener. Vaadin’s Spring Boot integration then automatically notifies that class about new UIs and I can keep track of them (and clean up when people leave). Here is the relevant code snippet:

I’m only interested in logged-in users and I use the authentication information for other things as well, so the registration code could be much simpler for your case, but you should get the point from this. You could use just a set for active UIs and skip the check about authentication. In the code snippet, I also notify UIs that are created just after the server starts, who are most likely active users waiting for the new version to come up.

In the same service class, I also provide a method I can use from my webhook to notify all users about the upcoming restart and to report the number of active users (I don’t want the grace period if there happen to be no active users).

The final missing piece of the notification system is a webhook I can call from my script that orchestrates the version upgrade. This is easily implemented using a Spring REST controller:

I only need to call that API via a local script, so I close the access to all but localhost-originated requests using the @PreAuthorize rule (Spring Security is already in use for authentication and authorization for the Vaadin UI part).

Script to orchestrate the version upgrade

All the preparations are now done. I could now manually do all the tiny specs required to update a new version to production. But I really want to automate it. Below, you can see the script I execute on the server once the new JAR is uploaded to the server. To automate this and the execution of the update script, I have another trivial shell script on my local machine, where I cut new releases. I upload the JAR file using scp and execute the update script using ssh. If I ever get another volunteer to maintain our club’s website, I’ll set up a CI system that does the same.

For this simple use case, I’m pretty happy with how the system is functioning in its current state. Going forward, I will need to carefully plan database changes. Apart from that, I can deploy new versions pretty much whenever I want. Ideally, the engineer in me would like to improve this setup further. There are numerous things one could do to improve this approach, each with different pros and cons:

I hope my recipe helps those of you who are stuck on legacy hosting setup. And it would be great to hear how you have solved any similar problems! Please reach out to me in our Discord or on Twitter