A Flock of Floating Vaadins 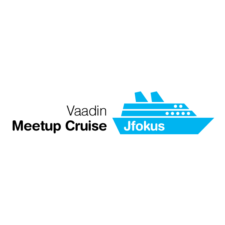 All over 100 of us boarded a slightly delayed cruiser from Turku, Finland, on its way to Stockholm, Sweden - the promised city of JFokus 2011.

We were quickly ushered into a grand auditorium with standing Vaadin banners on display all over, with traditional Finnish joiku music as ambient music, setting up a mystical mood. Without delay, our CEO Joonas took the stage, and presented the schedule for today:

We were first treated with an opening presentation on OSGi and how it relates to Java EE and GlassFish. He described how OSGi works in general, and then went on how GlassFish is built on it, and what implications that has regarding to modifying a GlassFish instance's features. Arun then continued to wrap up with how OSGi can be used in a numerous of example cases, in a wide range of enterpriseness.

Arguably a more familiar thing to Vaadin users was David Chandler's presentation about Google Web Toolkit, or GWT as we all have learned to know it. His talk started off with how to speed up your GWT compilation (excluding the use of Development Mode). He then continued with a more general presentation of the various benefits of using GWT in general.

Before our break, Joonas jumped in to tell about how Vaadin got its very first lines of code, back in '01, with the name "Millstone", and mentioned how this Java framework relates to Perl. Vaadin Pro Account beta mentioned, a kind of commercial support side (more info about this in the near future).

The night was wrapped with Artur's presentation of the near past, and near future. The status of Directory and WYSIWYG editor were mentioned, but the real highlight was a live demonstration of how well Vaadin is now integrated with Spring Roo, illustrated by creating a new conference management application right in front of us. His speech wrapped up with a sneak peek on the progress of Vaadin 7

Even though this yet isn't a goodbye, since we're going to continue our way to JFokus; on the behalf of the whole Vaadin team, I want to cordially thank all those who took part of the largest yet and historic first-time-ever Vaadin meetup on the Baltic Sea!