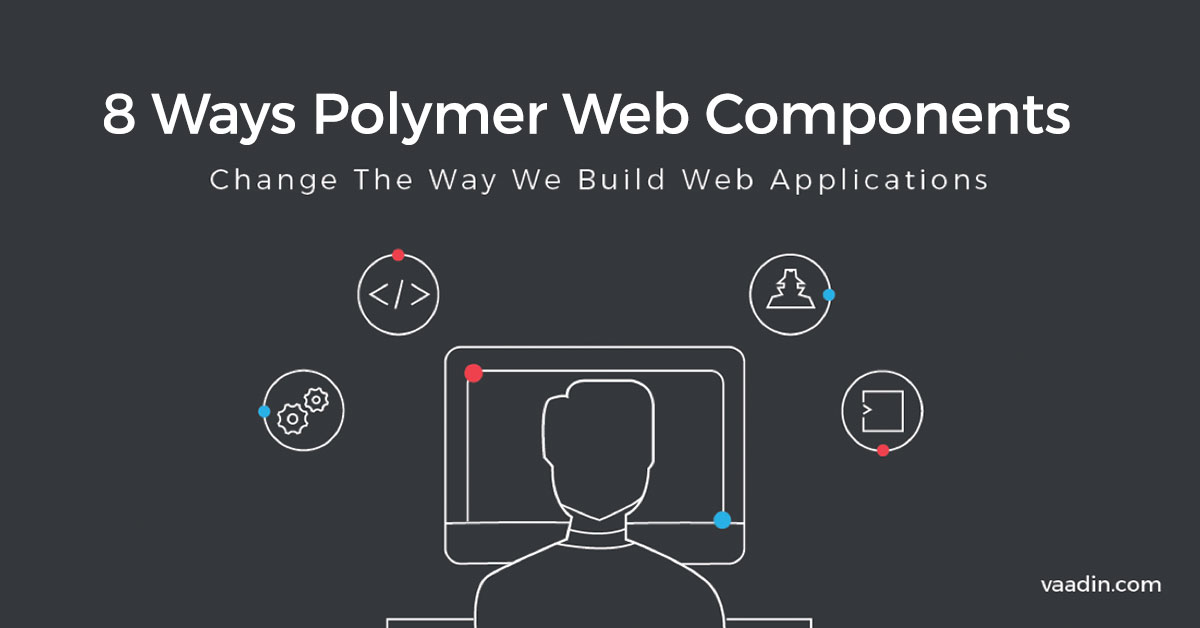 A guide to the 8 most important reasons to get started working with Polymer Web Components.

With Polymer Project getting ever closer to web component standardization, it’s important to understand just how this massive shift will impact the future of development. In this article, we’ll examine what Polymer web components and web components standards have in store for us and break down the top 8 ways they will change the way we build web applications.

One of the main goals of Web Components is to streamline the development process. With plug-and-play components that work “straight out of the box” and on any framework, the process of finding and selecting the various components from which you construct your app becomes far more manageable.

Web Components will make basic development more like building with Legos than what we currently recognize as traditional development. That’s certainly not to say that a higher level of development won’t be necessary.

What it does mean is that developers will be able to focus their attention on the fine details that make their project exceptional. They’ll be given a head start on creating the foundation of their project so they can focus their skills on the things that really help it look and perform its best.

This simplification of the development process is the core of their mission to “make life better for users and developers,” and you’ll find that it’s the binding theme of nearly every item in this list.

If you find perfect UI components today, more often than not you’ll only be able to use it within the framework it was created for. With Web Components and standardization you’ll be able to pick and choose from virtually any library and use their components interchangeably, and in any combination, you see fit.

As Polymer, the polyfill library for Web Component support puts it, “Developers deserve a platform they can work with, not around—one that makes it easy to build, deliver and maintain these universally accessible, reliable, delightful, high-performing apps.”

By creating an ecosystem where developers can cherry-pick the perfect components for their app without worrying about compatibility issues, they are truly living up to their goal. This compatibility will make finding the right component for your app much easier, further streamlining the development process and cutting down on project time.

After all, the more options you have to choose from, the more likely you are to find the perfect one to fit your need, and the quicker you’ll be able to do so.

With a simplified development process comes less code. This is especially true when considering that many of the elements that developers are currently coding into web apps will be contained within browsers.

Lighter code benefits everyone. An app full of heavy, ugly code is more difficult for developers to maintain and won’t perform as well for the user. Check out this table from Polymer to see just how light it truly is on these browsers.

“Polymer 2.0 is designed to realize the full promise of web components. One quick way to see this is a table showing the combined size of Polymer + the polyfills required to use 2.0's class-based element syntax. The more specs supported natively, the less code required. Down to ~10kb on Chrome.” 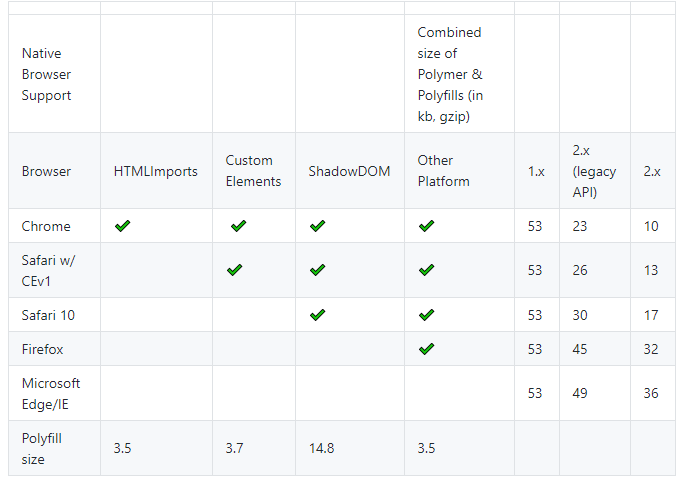 Currently, from a user’s point of view, many web apps launch slowly and don’t perform as well as native apps. Furthermore, they don’t work at all in scenarios with poor network connections.

According to Polymer Project, “Users deserve apps that launch quickly, respond instantly and can be accessed from anywhere—on devices of all types and sizes, under any network conditions.” Web components standards can help to make that a reality.

For users who download a web app, they need to download all of the various parts that make it up. With web components standardization, much of the code that is currently being downloaded as a part of the application will instead become a part of the web browser. That means the app will load much faster as the required components are built-in.

#5 - Clients Will Be Happier

The optimization of the development process due to Polymer web components and web components standardization will inevitably reward the end-user as well. Increases in efficiency lead to decreased cost, shorter time to market, and faster optimizations and maintenance.

Furthermore, budgets will be able to be applied in new areas. You’ll be able to deliver higher quality projects to clients for less resource investment across the board, spurring on a new level of innovation.

Virtually every framework has its library of UI components these days. The problem, once again, is that they’re all proprietary. However, web components standards will eliminate the need to develop these proprietary resources.

In a web component standardized future that ideally means that resources once directed at proprietary component creation would be redirected toward creating Web Components. In this scenario, both the number and quality of the reusable web components that developers have to choose from will increase dramatically.

#7 - Less Experienced Developers Will Do More

Web components standardization and simplified development will also open the door for less experienced developers to begin producing relatively high-quality applications. The implications that will have on development teams could be massive, with junior developers being able to share more of the workload volume than ever.

Being able to piece together various components to create a web app will allow more non-developers to try their hand at basic app development.

For example, at our booth at this year’s JavaOne conference, we hosted a t-shirt giveaway. We challenged attendees to write 5 lines of code with Vaadin in exchange for a free shirt. One attendee explained that she had never written a line of code in her life, but really wanted to win the shirt for her boyfriend. To make a long story short, she completed the challenge and won the shirt.

Oh YES, that’s how it is: Web Components are the future. Hands-on development with the technologies of tomorrow is one of the most rewarding feelings a developer can have while working on a project.

While it’s great fun, you can also keep your CV appealingly fresh and, naturally, brag about it to your colleagues on a coffee break. Be one of the cool kids: master Web Components.

The future of web applications is bright. The ecosystem is currently poised to change dramatically for the better, and it’s an exciting time for developers. Web Components are setting the stage for a global standardization of which the impact will inevitably reach your desk.

If you’re not already using Web Components or creating your own, there’s no better time to start than right now. These standardized web components are the future of web applications. Don’t miss the getting started guide for Vaadin Elements, our own reusable web component library, then be sure to explore the Polymer project itself.

web-components polymer web-applications
Ville Ingman
Ville Ingman is one of the old boys in the Vaadin team. A true Vaadiner for over 10 years already. Sharing thoughts and interesting phenomenons from the Vaadin ecosystem. Stay tuned.
Other posts by Ville Ingman