Cobra Systems is using the latest version of Vaadin Flow to build new, modern ERP software for their customers. The new software will be much more user-friendly and it is set to be released in mid-2023. Read the full story below.

The company: A software supplier for the Finnish food industry

Cobra Systems is a Finnish SaaS company founded in 1988. They are a full-service system supplier and for 30 years has focused on the development of information technology solutions for the food industry and wholesalers. Cobra Systems provides reliable software for their customers for the processing of orders, as well as the shipment and distribution of food products.

Currently, the team at Cobra Systems is in the process of building a modern Enterprise Resource Planning software (ERP), tentatively called Cobra ERP, so that it is portable on many devices and screen sizes for an enhanced user experience.

The project: Building a portable ERP software that scales to all devices

Whilst Cobra Systems' existing ERP system is still stable and working, they want to offer better capabilities for their users by making the switch from terminal software to new and modern technologies.

The goal of the new ERP software is to replace the outdated system with a new stack. This would allow the Cobra Systems team to maintain it without having to relearn old technologies. Furthermore, in order for users to benefit from all of the advantages of the software, it must be portable in many formats. The software needs to run properly and offer a great user experience on all devices; mobile phones, tablets, laptops, and desktops.

Emil Sommarström, Software Architect at Cobra Systems, explains that “if you’re building software that is based on a terminal that has 24 rows and 80 characters, you cannot cater for mobile and bigger screens at the same time, and that is the problem we want to solve.”

Cobra Systems is implementing the same views as in the old ERP system into the new software in a way that they can scale accordingly to each different device and screen size. This way Cobra Systems can avoid having to build three different versions of the same application. Especially with a smaller user base, developing several versions for mobile, tablet, and desktop can incur high development costs.

The new Cobra ERP was started on Vaadin 8 and has since been upgraded regularly to new Vaadin versions as they are released. Currently, the new software is on the latest version 23.2 of Vaadin Flow. In addition to a Vaadin frontend, the ERP system runs on a Spring Boot backend with a built-in Tomcat. The UI has just one deployable artifact, and on top of that Cobra Systems is using PostgreSQL as its database.

Cobra Systems opted for Vaadin as their framework of choice due to the reliability and stability it offers, especially when upgrading between new releases. Emil Sommarström explains that, if Cobra Systems were using another technology, they would have had to rebuild a lot during the five-year development process.

Vaadin offers a stable and reliable platform for developers so that they can focus on building the product with minimal interferences to their productivity. Especially after Vaadin simplified its release model, Cobra Systems has found it much easier to follow the latest and recommended version, and from a technical standpoint, it has been easy to upgrade to new Vaadin versions as they are released.

If you want to get stuff done and don't care much about frontend technologies, it might not make sense to spend a lot of time and resources chasing the latest web technologies. With Vaadin, you can still make your application’s UIs look good and easy to navigate for the user, whilst leaving the research to Vaadin and just following along. Vaadin has proven to be a really good choice!

The result: A fine-tuned UI to maximize usability for end users

So far, Cobra Systems has rebuilt the majority of the new ERP software’s views to be also usable on a phone with the help of the Design team at Vaadin. A seemingly small change in the UI can have a great impact on the usability of the application. For example, by simply adjusting the size of a search bar, you can determine whether users are actually able to use the application also on their mobile devices.

It was a nice UX tune-up project. It was really impressive to see experienced designers tune up elements in an efficient manner. If you’re stuck with getting those pixels to bend, just ask Vaadin and they will for sure help!

The company is looking to release the new Cobra ERP system by mid- 2023. Vaadin has enabled the team at Cobra Systems to migrate fast and feedback for the UI demos has been positive. Their customers seem to be eager to get their hands on the new system. We look forward to the release of the modern and fresh-looking Cobra ERP system!

Figure 1: The UI for sales orders in desktop view before the UX tune-up.

Figure 2: The result of the UX tuning. You can spot a better breadcrumb, the buttons have moved, and the view scales accordingly. The filter also takes less space as it can be expanded. 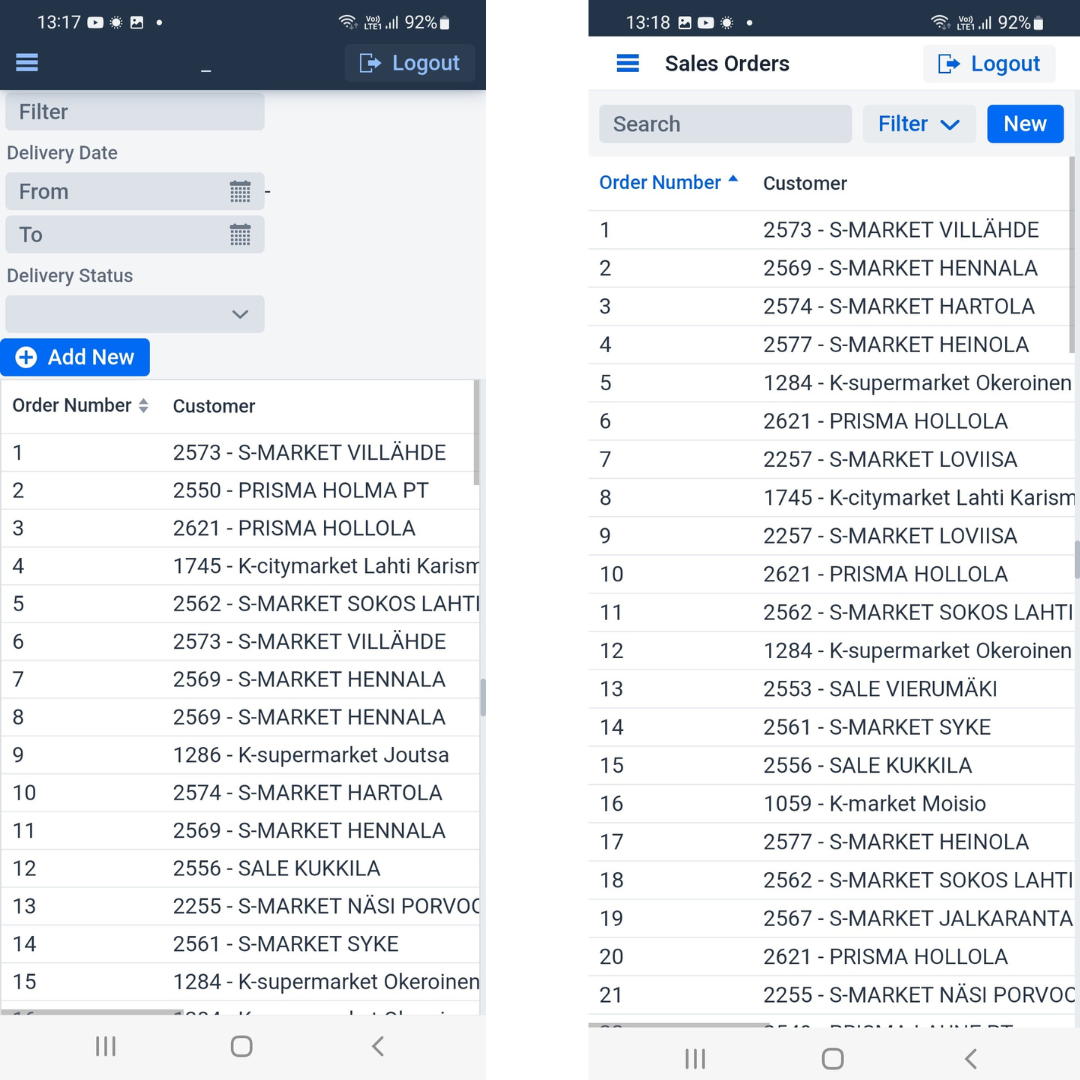 Figures 3 and 4: Mobile view before UX tuning and the final result. The filter is compact and all buttons are conveniently on a single row. Also, the editing of a row is now possible as one row uses the whole screen.

Are your users not happy with your business application? Does it feel somehow off, but you can’t really point out the reasons why, or how to fix it? Consulting an expert is often helpful in these situations and that’s where Vaadin can help!