Traditional clustering solutions focus on performing clustering tasks purely server-side. The browser only possesses one URL (one IP address) after all, so there is not much we can do (well, there is, but more on this later). Usually, the intent behind clustering is twofold: 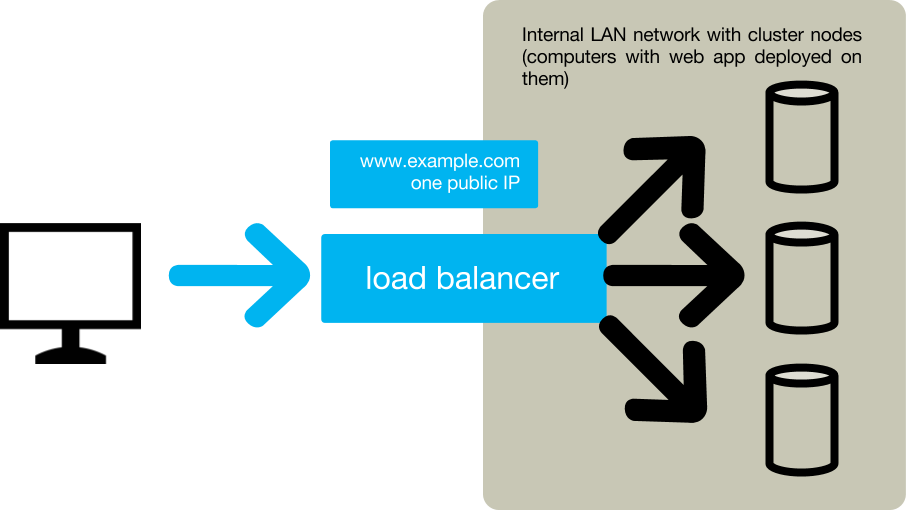 Naturally, there must be some network gizmo in front of those servers - all incoming traffic is routed to a single IP by the browser after all, so there must be a special computer acting as a load balancer present there. This load balancer talks to the servers, monitors their load (and whether they are alive) and passes the traffic through to the least loaded server. Usually, this is Apache with mod_proxy or some other software-based solution; more expensive setups take advantage of hardware load balancers. The load balancer should have the following properties:

The trouble with server-side clusters

Unless you are an administrator guy trained to set up a cluster of a particular web server, the cluster is not easy to set up (and most importantly - test, so that you gain confidence that the cluster actually works and performs its duties, both failover-wise and load-balancing-wise). Even the simplest options of having a group of JBosses with a special RedHat-patched Tomcat as a load-balancer (so that it can talk to JBosses and monitor them for load) takes some time to set up. Not to mention testing - often it is easier to just take the leap of faith and hope the cluster works as expected ;-)

So, for small projects clusters are often overkill; not to mention that there is this single-point-of-failure (load-balancer), unless you do an even more complex setup of having two load-balancers competing for one IP address.

What about other options?

Is it possible to get the failover/load-balancer properties some other way? How about if the browser took the role of load balancing? Obviously this is a great single-point-of-failure - when the browser crashes, it is clear to the user that she can’t browse the web until she starts the browser again. Naturally, the browser cannot possibly know the load on the servers so it can’t act as an informed load-balancer, but what about the browser doing the failover at least? 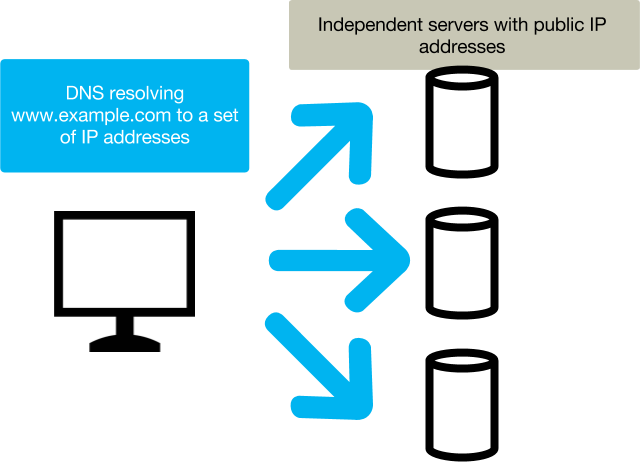 It is actually possible to bind multiple IP addresses to a single DNS record. The DNS server may then shuffle or rotate the IP list (so-called DNS round-robin), so that different browsers will try different IPs in a different order. With thousands of browsers, this works surprisingly well and the load is distributed more-or-less evenly amongst the servers. Looks great, right? Unfortunately, it isn’t. The trouble is the session. The browser is free to switch IPs often, even on every request, and if the session is not distributed amongst the computers in some way, then this approach won’t work. And distributing a session requires a server-side cluster, which we wanted to avoid. So, any other solutions?

Maybe we could implement a load-balancer inside the browser. How? JavaScript.

Then, in case of server crash, just let that javascript code redirect to another DNS. Simple, right? Let’s discuss this a bit:

So, how is this implemented in Vaadin? In Vaadin there is a reconnection dialog, appearing every time a connection is lost. We have just equipped the dialog with the failover code, so that in case of server crash the dialog will automatically redirect to the next server. This is exactly what the following extension does: https://vaadin.com/directory#!addon/failover-vaadin Just include the extension in your app and you are all set. Now *this* was simple, huh? You can watch the extension in action in the following Youtube video. The video shows launching of four independent Jetty instances in Docker on four different ports, 8080-8083.

There are obvious drawbacks to this solution. If the www.service.com is down, there is no way to download the JavaScript with the additional server list. So this kind of becomes single-point-of-failure. This could perhaps be remedied by employing the offline mode in HTML5, but this needs investigation. But if this was possible, the browser would only need to download the JavaScript once; since then it would be present in your browser, and will thus be able to find a live server even when the primary one is dead.

Downsides of browser-side load-balancing and failover:

So, if you are willing to sacrifice the session in case of crash, this solution may be perfect for you.